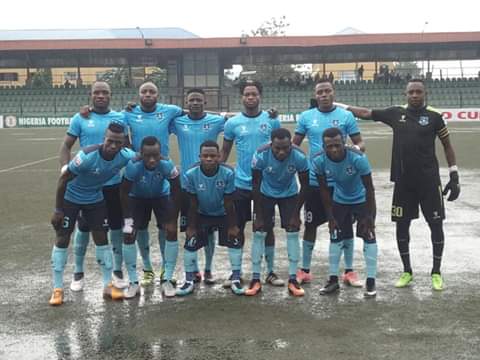 Niger Tornadoes have put their relegation from the NPFL to the NNL behind them as they make it to the final of the cup competition for the second time since losing to Akwa United in 2017.

The 2000 FA Cup winners denied Rivers United the opportunity of playing in the final for the first time as they walk away with a 2-1 victory at the Agege Township Stadium.

The Ghanaian forward, Asamoah Frimpong open the scoring for the Tornadoes side before Adebimpe levelled the scoreline for the Pride of Rivers.

Saidi put Niger Tornadoes in front again in the 44th minutes as the Minna based clubs qualify for the continent  after Pillars won Calabar Rovers.

Niger Tornadoes featured in CAF Cup Winners Cup in 2001 and got to the quarterfinals losing to Angola’s Interclube 4-1 aggregate as this will be the second time they will playing continental football.

In the other game Kano Pillars comes from a goal down to beat lower league club Calabar Rovers on penalties to book a final with Niger Tornadoes.

Enyimba, Kano Pillars, Rangers and Niger Tornadoes are the four clubs that will represent Nigeria in the continent this coming season.