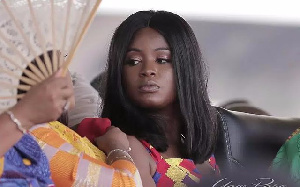 Allegations that President Nana Akufo-Addo’s daughter, Ms Gyankroma Akufo-Addo, was contracted to airlift the Black Stars Supporters Union to Egypt for the ongoing Africa Cup of Nations and, as a result, bagged some $2,400,000, are false, the Ministry of Youth and Sports has said.

A statement signed by the minister himself, Mr Isaac Asiamah, also denied claims that Gyankroma was in charge of feeding and sheltering the 120 supporters, each of whose travel expenses for the whole Afcon season amounts to $20,000.

“The Ministry of Youth and Sports has taken a serious note of publications on various social media platforms alleging that the daughter of H.E the President of the Republic, Gyankroma Akufo-Addo, was contracted to airlift Black Stars Supporters Union to Egypt and provide them with hostel and food for the period of the tournament.

“The Ministry wishes to state in no uncertain terms that the publication is not only false but frivolous and a well-calculated attempt to soil the name of the family of H.E the President of the Republic”, the statement said.

It said the ferrying of the supporters, the ministry’s officials and other key stakeholders were done by “a 5-member committee made up of staff of MOYS and a representative from the Attorney General and Ministry of Justice, tasked by the sector Minister, Hon Kwame Asiamah, with the responsibility of ensuring the successful organisation of Ghana’s supporters and other officials to support the Black Stars in the country’s quest to win our 5th Afcon Cup.”

“In order to save cost, protect the public purse and ensure that there is value for money”, the ministry said: “All arrangements of accommodation and internal transportation were done by the Ghana Embassy in Egypt in conjunction with the Project Committee of the MOYS”.

The ministry added that: “All flight arrangements were contracted to the White Oak Limited, a reputable agency with an important experience in the travel and tour business. Therefore, the reported sum of money alleged to have been amassed by the daughter of H.E the President is totally unfounded, mischievous and a figment of their own imaginations”