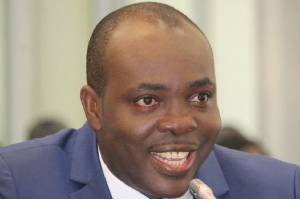 Minister for Youth and Sports, Isaac Asiamah has disclosed that the government spent a total of 4.5 million dollars on the just ended 2019 African Cup of Nations (AFCON) tournament in Egypt.

Mr Asiamah said this when he appeared before Parliament to brief the House on the budget for the tournament and to answer questions relating to Black Stars’ tragic exit from the tournament.

Giving the breakdown of the expenditure for the tournament, Mr Asiamah said about 6.3 million was budgeted but only 4.5 million was used.

“The Normalisation Committee will give a detailed report on July 26, 2019 after which major recommendations and decisions with regards to the re-organisation of football in Ghana will be taken,” he said.

Briefing Parliament on Wednesday, the Minister indicated that the highest budget item was accommodation which cost $1.14 million while visa fees cost $8,541 and was the lowest.

He said Ghana hired coach Kwesi Appiah with a “clear mandate” to lead the Black Stars win the trophy and end a 37-year drought.

The Minority Spokesperson for Youth and Sports, Kobena Mensah Woyome also requested for details about the money spent on spectators and MPs who traveled to Egypt.

Below is the breakdown: