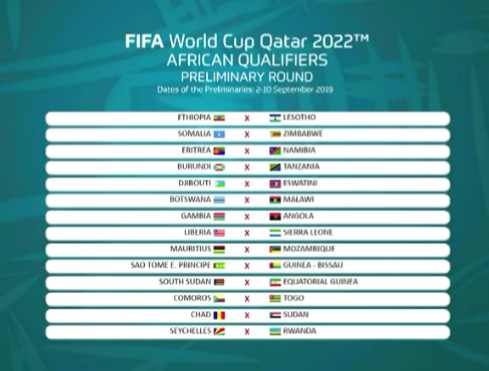 The draws for the preliminary round of Qatar 2020 World Cup was done today in the city of Cairo with the 24 Lowest ranked sides paired against each other.

Burundi and Tanzania who played at the recent Africa Cup of Nations have been drawn to face each in the preliminary round.

Also  Some countries who played at the recent AFCON tournament in Egypt will also have to take part in the preliminary round between 2 and 10 September.

Zimbabwe, Namibia, Angola and Guinea-Bissau are up against teams like Somalia, Eritrea, The Gambia and Sao Tome e Principe respectively.

The 14 preliminary round winners, over two legs, and the 26 countries who received byes will be split into 10 groups of four after a fresh draw with the first matches next March.