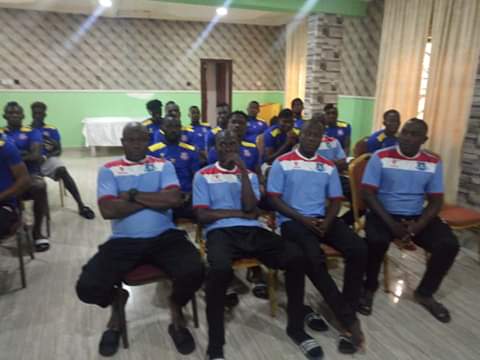 TORNADOES PLAYERS ATTENDS AN HOUR LECTURE ON THE NEW LAWS OF THE GAME:

The players and Technical Crew of Niger Tornadoes Football Club of minna who are presently in Kaduna preparing for this weekends CAF CONFEDERATIONS CUP first leg against Santoba Fc of Guinea, attended an hour lecture on the new changes of FIFA laws that took effect on the 1st of June earlier this year.

According to Niger Tornadoes Technical Adviser Coach Abubakar Bala Mohammed, the essence of the lecture was to keep players acquainted with new laws of the game, with the aim of putting them to practice as the Club embarks on continental assignment.

The Kaduna based and FIFA graded referee Patrick Ishaya who took them through the session, encouraged the players to always remained discipline while on the pitch to avoid incurring referees wrath.

SOME OF THE NOTABLE CHANGES ARE:

*Issuing of cards to coaches, for any act of misconduct.

*Players of team taking free kick not allow to stand in the wall during free kicks, but to stay few inches away from the wall.

*Goalkeeper not allow to move inbetween the sticks during penalty kicks, but can take a step forward before the kick.

*Goalkeepers can be substituted during a penalty shoot out so long the team in question hasn’t exhausted it changes prior to the shoot outs… amongst others.