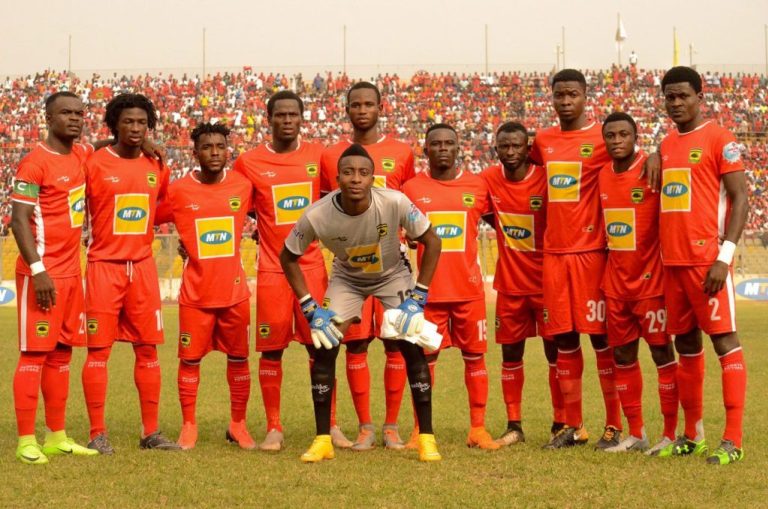 Asante Kotoko suffered a 3-2 defeat against Kano Pillars in Nigeria in what was a thrilling five goals thriller .

After going a goal down in the first half, the Porcupine Warriors fought back and took the lead through Justice Blay and Godfred Asiamah , but  two late goals from Aliu Rabiu and Nwagua Nyama secured the home team the needed victory.

Ayiku Tetteh, Empem Dacosta, Justice Blay, Kelvin Andoh, George Abege and Richard Arthur all made their debut in against the Aiteo Cup winners.

The home side started the game on a high note and dominated the early proceedings.

It didn’t take long before Rehaku Yussif gave them the lead in the 11th minute, Hitting a low shot into the back of the net.

Kano Pillars took control of  the game after getting the opener by taking the ball to the visitors.

Rabiu Ali nearly made 2-0 for the home team, but Felix Annan produced a good saved to denied him.

It was all Kano Pillars after getting the goal as they look to double their lead but Felix Annan showed class to denied them on many occasions.

Kano Pillars maintained their lead till the end of the first half.

Kotoko responded quickly in the second half through Justice Blay, the former Medeama midfielder capatilized from a lose mark and tap the ball home to make it 1-1.

Substitute Godfred Asiamah made it 2-1 for Kotoko in the 67th minute, the midfielder converted a beautiful freekick outside the penalty box to give his side the lead.

Aliu Rabiu equalized for the home team in the 70th minute, with a beautiful finish in the penalty box.

Nyama Nwagua made it 3-2 for Kano Pillars in the 78th minutes, capitalizing  from a mistake in the penalty box to bury the ball in the back of the net.

Kotoko huffed and puffed to get the equalizer, but Kano Pillars defended very well and maintained their lead.

Despite playing four minute of additional time, none of the sides was able to get another goal as the referee blew his whistle for the end of the game.