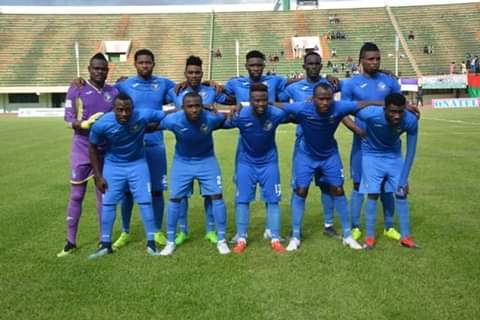 Enyimba Football Club will have all to play for in the return fixture of their CAF Champions League first round tie following a 0-1 loss to Rahimo FC in the first leg at the Stade du 4 Août in Ouagadougou this evening.

Issouf Zanon’s deflected effort on the half hour made all the difference as the hosts maximised their early dominance to secure a vital win.

The Nigerians hardly got off the block and were severally besieged by the dangerous duo of Zanon and Mody Cisse, with the former forcing Theophilus Afelokhai to a save after eight minutes.

The lively number nine was again denied by Afelokhai from close range before Cisse struck the base of the upright with a well taken effort.

Stanley Dimgba and Martins Usule, at the other end, combined beautifully inside the box but were prevented by a timely clearance.

The hosts eventually took the lead on the half hour when Zanon dribbled into the box before releasing and effort that took a wicked deflection of Ifeanyi Anaemena into the net.

With the introduction of Jean-Marie Guera and Victor Mbaoma, Enyimba pressed higher after the restart but chances were few and far between as the hosts displayed defensive doggedness to see off the contest.

The return fixture will be decided at the Enyimba Stadium in a fortnight.

“It’s not a good result for us but at the same time it’s not catastrophic because if we had lost by two goals or three then it would be a difficult situation.

“As you know we are all starting and results are always this way until we get ourselves into the competition where we get much fitter.

“They have a youthful and young team with very good mobility and good techniques and they are very fit.

“The goal came in with a deflection. We could have saved that goal but now we have to go back to Aba and cancel the goal and have to get another one more goal to seal the deal.

“We’ve seen the team now so the most important thing is to go back, sit down and work with what we’ve seen of the team.”