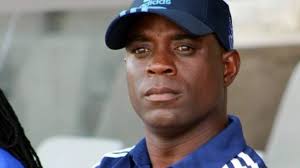 BY TAWANDA TAFIRENYIKA
“# Zimbabwe” NGEZI Platinum coach Erol Akbay is backing Harare football giants Dynamos to go all the way and win the championship this season.

The Dutch coach watched the Glamour Boys overpower Mushowani Stars 2-0 in a Castle Lager Premiership tie at Rufaro on Sunday and felt they have transformed from pretenders to contenders.

Akaby whose team are also in the championship matrix with 28 points, four behind log leaders FC Platinum face Mushowani in their next match.

“Dynamos are now playing better football than when I saw them at the beginning of the season. Today they played and scored and that is very important for the team.
They also scored two goals and had more chances to score and that is important for any team.

As a coach that is what you want and you cannot complain. The second half has just begun but the way Dynamos played, they can win the title. But its too early to say this and that team will win it, we are just getting into the second half and several teams still have a chance, its still open,” he said.

The Dutchman’s submissions are contrary to those of the Dynamos coach Tonderai Ndiraya who believes his lads have not reached the level he wants them to be. He suggested they still needed to work harder in order to compete.

Dynamos had not scored more than one goal since Ndiraya took over from George Chigowe. Although their victory over Mushowani took them to 27 points, effectively closing in on the title chasers, Ndiraya remained unimpressed.

“I am happy with scoring two goals after a long time. It’s the first time we have scored two goals since I came in and it’s quite refreshing, though overall I was not impressed by the performance,” he said.

FC Platinum who are fighting on two fronts as they are also involved in the CAF Champions League have a game in hand but remain on top of the log standings with 32 points from 17 matches.

Caps United also saw off Manica Diamonds 1-0 to leap frog Chicken Inn and ease into second place with 31 points while Chicken Inn who suffered a 2-1 defeat to ZPC Kariba are a point behind although they have a game in hand.

Army side Black Rhinos who lost 1-0 to Bulawayo giants Highlanders are in fourth place with same number of points with ZPC Kariba a rung below also with 30 points.
Ends//