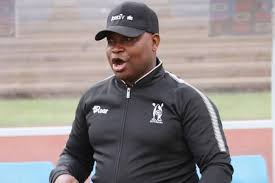 “#Zimbabwe” BOTSWANA Premier League side Gaborone United (GU) have appointed Serbian national Nikola Kavazović as head coach to take over from Madinda Ndlovu who is recuperating after he was hospitalised with a suspected stroke.

The former Highlanders and Warriors winger is reported to have suffered a stroke before being admitted in the intensive care unit (ICU) at a private hospital in Gaborone.

“We are happy to announce the appointment of Serbian, Nikola Kavazovic as our head coach till the end of the season. Nikola has been roped in following the hospitalization of Madinda Ndlovu who collapsed in training a fortnight ago. We have taken into consideration the health of Madinda (Ndlovu) hence the appointment of Nikola. The boss (Nicholas Zakhem) had engaged Madinda before this appointment,” Gaborone United said.

Zakhem is the club director who lured Madinda to GU in July.

The former Highlanders’ gaffer made history in Botswana when he won three successive league titles, two with Mochudi Centre Chiefs (2011-12 and 2012-2013) and in the 2013-14 season with Township Rollers.

Madinda had only presided over the first game of the season Gaborone United where they beat Gilport Lions 3-0 and was preparing for the second game against Miscellaneous which GU drew 1-1 in the Zimbabwean’s absence.

They also drew the third match against and Kavazović has been appointed ahead of today’s game against Tafic at Lobatse Stadium.
Tafic is coached by Zimbabwean Saul Chaminuka.

Kavazović is not new to the Botswana Premier League having won the championship in the 2017-2018 with Township Rollers, the first Botswana side to qualify for the Caf Champions League group stages.