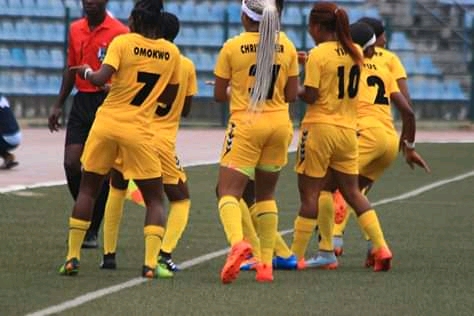 Confluence Queens of Lokoja made history on their first Nigeria Women Football League Super Four tournament by booking their place in the final on Sunday.

Arit Usang was the hero for the Lokoja Queens as she scored two first half goals to end Adamawa Queens unbeaten run in the 2019 Nigeria Women Football League.

Confluence Queens got their first goal in the third minutes as Arit Usang through a rebound after Nkiruka failed to handle the ball.

Adamawa Queens came back into the game after conceding an early goal but their effort are of no threat to the confluence Queens goalkeeper.

Arit Usang got her brace and double the lead for Confluence Queens in the 25th minutes as the cruise to the final of the super four as both teams failed to find the back of the net in second half.

The other game of the day saw defending champions, Bayelsa Queens failing to defend their title after losing on penalties to Rivers Angels.

The game went straight to penalties after both teams failed to scored in regulation time.

Anjor Mary and Joy Jerry failed to convert their penalty kick with the Rivers Angels goalkeeper Nnadozie saving one of the two penalties as the pride of Rivers cruise to the final.

Debutant Confluence Queens will battle Rivers Angels for the title on Sunday afternoon at the Agege township Stadium in Lagos.