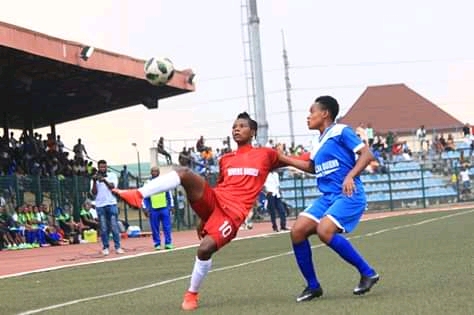 The board of the Nigeria Women Football League, headed by Aisha Falode, has expressed satisfaction at the standard of soccer artistry displayed by the four clubs that played in the first and second semi finals at the 2018/2019 Nigeria Women Premier League, at the ‘Soccer Temple’ Agege Stadium, Lagos on Friday.

The Vice Chairman of the NWFL board, The Right Honourable Margaret Incheen, said after the semi finals that: “The high standard displayed by the teams was a reflection of the great works done so far by the Aisha Falode-led board in the last two years to take the women’s league to the next level, over taking over the management of the gender game in 2017.

“Because of the brilliant display of talents by the teams, the spectators at the Agege Stadium, sat at the edge of their seats and were not disappointed coming to the stadium.”

Incheen noted: “As a board we are proud to say that, we are satisfied with the standard of the NWPL Super 4, and we shall definitely make efforts for further development especially as the Confederation of African Football will at any moment introduce the CAF Women Champion’s League in African. With what we have seen here we are confident that a Nigerian team will win the Women’s CAF Champions League when it’s introduced.”

In a related development, the Chairperson of the NWFL, Aisha Falode, has given plaudits to the First Vice president of the Nigeria Football Federation, Barrister Seyi Akinwunmi, both in his private and official capacities.

Falode, said Friday afternoon in Lagos, that, Akinwunmi, who doubles as the Chairman of the Lagos State Football Association together with his board members in Lagos, have done wonderfully well to lift the standard of the women’s league to a great height both at the Premier cadre and the Pro -League level.

“The Lagos FA in 2012 motivated the Lagos female team to win the gold at the National Sports Festival Football Event, hosted by the state, which invariably flagged off the great developmental plans they have achieved today.
“The Lagos State U-15 girls just won the Youth Festival gold in Ilorin.

“The Lagos FA under Seyi Akinwunmi has also produced players for practically every top flight side of the women’s league and for every class of the three national women’s soccer teams.

“The Lagos FA partnered with the British Council, English Premier League and Ministry of Education to transfer skills to young girls and many more, a project that gave hope to young women’s footballers.

“For Seyi Akinwunmi an individual, he has for two unbroken seasons sponsored the Best Referee in the NWFL every week, where the best referee for the week gets N25,000. This has helped improved in the standard of officiating evident in the NWPL. The excellent officiating of matches of the NWPL was attested to openly by the clubs at the pre-match meeting for the Super 4.

“We on the board of the NWFL will forever be grateful to Akinwunmi for these gestures. We pray that God will continue to bless Seyi Akinwunmi and the Lagos FA for their great works,” Falode said.

The final of the 2018/2019 Nigeria Women Premier League holds tomorrow at the Agege Stadium, Lagos with Rivers Angels slugging it out with Confluence Queens of Lokoja.

The Special Guests of Honours at the final will be the Sports Minister, Sunday Dare, the Minister for Women’s Affairs, Mr. Pauline Tallen and the Deputy Governor, Edo State, Rt. Honourable Philip Shaibu.
Earlier before the final match, Bayelsa Queens of Yenagoa, will play in the third place game against Adamawa Queens of Yola.