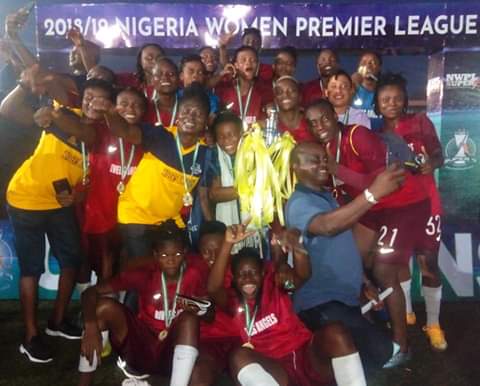 The Jewels of Rivers defeated hard-fighting newcomers, Confluence Queens of Lokoja, with one unanswered goal at the final of the 2019 NWPL Super 4 on Sunday at the Agege Stadium in Lagos.

Falode, who took special notice of the Rivers state governor’s uncommon and unwavering financial support over the years to the team insisted that the team awesome and overwhelming dominance of women’s football in the land would not have been possible without the unfailing interest and support of the governor especially as it concerns the welfare of the team and players.

“We want to congratulate the governor of Rivers state, Wike and the newest Nigerian champions, Rivers Angels for their victory at the just concluded 2018/2019 Nigeria Women Premier League (NWPL) Super 4.

“We have taken keen interest in the governor’s special and passionate interest and support for the team over the years.

“We make bold to say that the immediate victory and past victories achieved by the team may not have been possible without the huge financial support of the governor to the team.

“Of course, we need not reinstate the obvious that the team happens to be one of those state-owned clubs that earn their salaries regularly.

“Aside, we have equally noted that the governor do not joke with the welfare of the team in every aspect of it.

“Of course, the saying that, to whom much is given, much is expected, is very apt in describing the many laudable achievements of the team over the years.

“Worthy of note is the fact that Rivers Angels are almost the nursery and pool of material for the various national teams.

“Rivers Angels are by virtue of their 2018/2019 NWPL Super 4 victory have become instant beneficiaries of the maiden one week tour to Spain courtesy of the LaLiga/NWFL partnership deal.

“We plead with the governor to further open his coast especially now that the team will be shouldering the whole responsibility of the Women League as ambassadors to the first of its kind NWFL supervised tour of Spain,” said the NWFL chairperson, Falode.

Rivers Angels, too equally qualified to engage the 2018 Aiteo Cup winners, Nasarawa Amazons in the upcoming third edition of the best of the best championship – the Champions Shield.