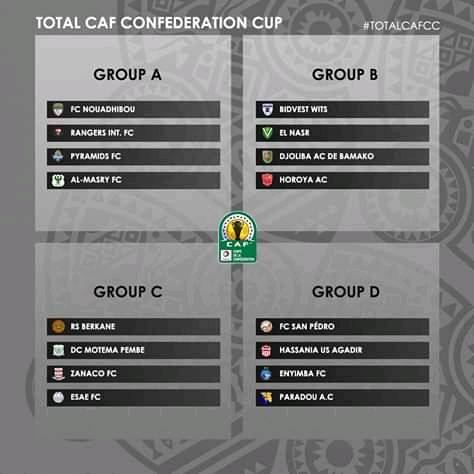 The draws for 2019/2020 CAF Confederation cup group stage done in  on Tuesday 12 November 2019 in Cairo saw Nigeria representatives, Rangers and Enyimba in Group A and D

Enugu Rangers is paired in group A alongside the two Egyptian clubs Pyramids FC, Al Masry SC and FC Nouadhibou of Mauritania.

Enugu Rangers  crashed out in the group stage of the 2018/2019 season in a group involving two Tunisia clubs, Etoile Du Sahel, CS Sfaxien and  Salitas FC of Burkina and will be targeting at least a semi finals finished this season.

Nigeria other representative Enyimba whom crashed out in the semi finals of the CAF Confederation Cup in the 2017/2018 season is in group D alongside FC San Pedro of Ivory Coast, Hassania Agadir of Morocco and Paradou AC of Ivory Coast.

Nigeria League Champions, Enyimba dropped down to the CAF Confederation Cup after losing to Al Hilal in the playoff round of the CAF champions league.

[CAF] CAF Champions League: History Made As 8 Past Winners Made It To Quarter Finals

[CAF] CAFCC: Enyimba, Zanaco In A Must Win Clash As 7 Teams Battles For Final Four Spots