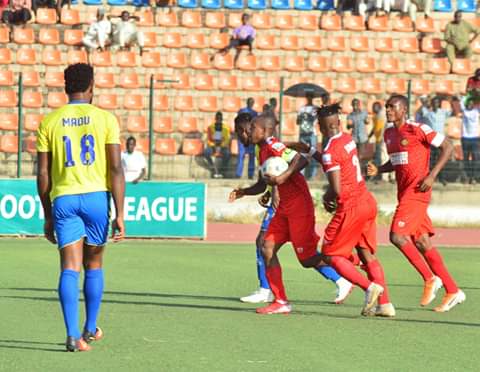 Nasarawa United and Akwa United search for a win continues after both teams were beaten on match day six.

Nasarawa United were handed another home loss by Delta Force in Lafia.

The Solid Miner’s are without a win after six games and rock bottom of the log with just 2 points from six games.

Another team yet to record a win after six games this season is Akwa United.

The Promise keepers who missed on clinching one of the continental ticket last season are still searching for a win after Silas Nwankwo 60 minutes goal for Sunshine Stars extend Akwa United winless run.

The Uyo based club after picking up their only away point against Warri Wolves has failed to pick all maximum points at home even against bottom placed Nasarawa United and will be at home to newly promoted side, Adamawa United on Sunday.

In Port Harcourt, Rivers United failed to walk pass Abia Warriors after their match day five away win against Warri Wolves in Warri.

The pride of Rivers State and the Umuahia Warriors Match day six encounter ended in a goalles draw at the Yakubu Gowon Stadium.

In Gombe, Adamawa United wiped Katsina 4-0 in Gombe to move out of the relegation zone while Plateau United winning streak at home came an end after they were held by Pillars to a goalles draw in Jos.