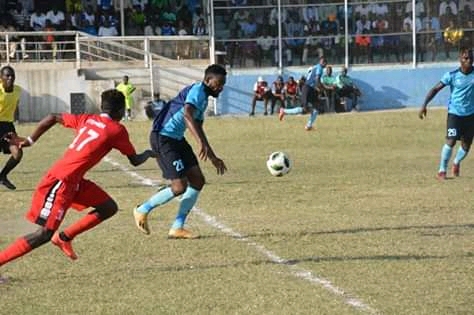 Niger Tornadoes Football Club Of Minna extends it unbeaten start to the season after pipping EFCC Football Club of Abuja by a lone goal at the Bako Kontagora Stadium Minna in a week 3 Nigeria National League (NNL) tie.

The encounter which began on slow pace by both team gradually grew as the two teams raised the tempo of their game.

EFCC FC playing their first game of the season were full of energy as they match the home team by size earning them a goalless first half.

On resumption into the second half the teams began where they left off at half time with Niger Tornadoes having upper hand in their build ups, a clear response to half time team talk and quick substitutions made by Coach Abubakar Bala Mohammed who introduced Shamsudeen Hashim and Sam Victor Abata in places of Solomon Owello and Eric Frimpong who both had a silent first half.

A sustained pressure by Niger Tornadoes resulted into a goal as Shamsudeen Hashim latches onto Kabir Umar’s effort that hit the bar, slotting home easily in the 65th throwing the home fans into a wild jubilation.

More pressure by the home team yielded no goal especially from Sam Victor Abata whose introduction added more bite to Tornadoes attack as he tormented the EFCC FC defence utilizing his energy and pace.

Responding to press men after the final whistle Technical Adviser Kabiru Awolabi of EFCC FC expressed satisfaction with the spirited performance of his team, saying his boys gave a very good account of themselves.

Coach Awolabi then commended the officials for a professional handling of the match describing it as a way forward for the betterment of the league.

He said, ” in a game of football, all that matters at the of the final whistle is three point, I’m happy with the 3 point even though it isn’t what we prepared for” but our today’s opponent ( EFCC FC) are equally not pushovers, parading a very young and discipline team”

Coach Bala added that, the Technical Crew is aware of the teams inability to score more goals and have been working on that aspect, saying “finishing is our major challenge, but, it is still early in the season and there is room for improvement.