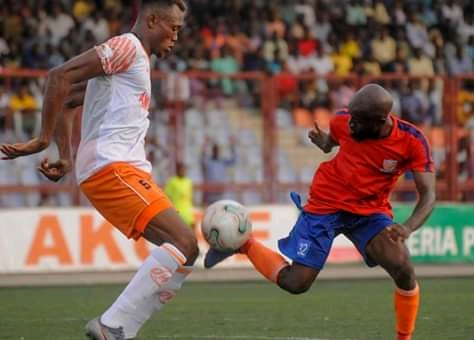 Hostilities returns on Sunday on match day seven of the Nigeria Professional Football League with the star match taking place in Kano.

Katsina United will be looking to redeem their pride when they take on the Olukoya boys on Sunday at the Mohammed Dikko Stadium.

The Chanji boys were dismantled last week Sunday by Adamawa United in Gombe and will be welcoming a MFM side with two wins away from home this season to Katsina.

Nasarawa United will continue their search for a first win in the 2019/2020 Nigeria professional Football League in Akure when they visit Sunshine Stars.

The Solid Miners are yet to record a win after two draws and four loss against Wikki Tourist and Delta Force at home, Katsina United and Enyimba away.

Warri Wolves will be at home to 4th placed Lobi Stars at the Warri City Stadium.

The Seasiders has only register one win at home against Adamawa United, a draw against Akwa United and loss to Rivers United while Lobi Stars had won Four of their five games so far.

Fidelis Illechukwu side home record this season is worrisome as the peace boys are with a win and a draw in their three away games aims to secure the bragging rights at the Okigwe Township stadium.

Kano Pillars vs Delta Force
After five games without a goal and win for Masu Gida, Kano Pillars restored their Pride with a 2-1 away win in Uyo after LMC Lifted ban enforced On their Captain Rabiu Ali.

Sani Abacha stadium will be filled to capacity for the first time this season as fans will be able to watch Kano Pillars take on a well motivated Delta Force whom walk away with a 1-0 victory in Lafia on match day six.

Sai Masu Gida will be riding on their victory in Uyo as they take on Delta Force.

The Anambra Warriors have won two, draw two and lost two while Wikki Tourist have won four, drawn one, lost one.

A win for the Bauchi club will see them remain in second or move top of table if Plateau United fails to pick maximum points in Okigwe.

John Obuh will be seeking to end Akwa United’s poor run form to the season as they welcome newly promoted Adamawa United to Uyo.

The Promise Keepers are yet to Keep their promise to the football loving people of Akwa Ibom State as they are yet to record a win this season.

The promise Keepers find themselves in the foot relegation zone with four points from six games and will be at home to newly promoted side Adamawa United in search of their first win to bring back their fans who are becoming impatient with the club poor run this season.

Akwa Starlets will visit Abia Warriors in Umuahia after Kano Pillars ended their unbeaten run in a rescheduled game.

The Uyo based team whom walked away with a 2-0 victory in Enugu were handed a 2-1 defeat by Kano Pillars on Wednesday and are set to take on 6th place Abia Warriors on Sunday.