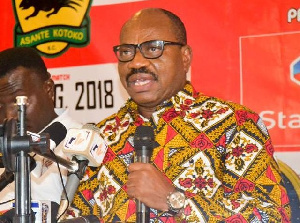 Kotoko CEO George Amoako has stated that clubs in the country are not yet ready to battle with their peers in Africa for the CAF inter-club competitions titles.
According to him, the difference in gap between Ghanaian clubs and their peers in Africa is wide and they need to put in the extra effort to close the margin.
In an interview with Ghana-  Accra Base Station   Asempa FM, the Executive Council member noted that bridging the gap is a possibility.
“Other African clubs are miles ahead of us, we need to work hard to bridge the gap as it is possible to catch up. As we speak now no club in Ghana can win the CAF Confederations or Champions league”
“Ghanaian clubs have a long way to go We need to do a lot, to meet the standard out there”
George Amoako further touched on the appointment of Maxwell Konadu as the head coach for Kotoko, who has signed a 2-year renewal contract with the Kumasi-based team and yesterday was unveiled at a ceremony at the club’s Adako Jachie training centre.
He disclosed that the former Black Stars assistant coach and other technical men had a hand in the assembling of the squad.
“We had to rely on Maxwell Konadu and other technical people to put these players together”
“His recommendation is about 90% of the players we have now.”
Kotoko and Hearts of Oak have a date on Sunday in the replay of the 2019 President’s Cup at the Accra Sports Stadium at 3:00 pm. According to reports Maxwell Konadu will not be in the dugout due to the limited time he’s had with the team.