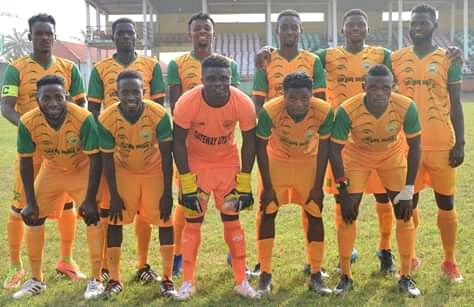 After two consecutive home wins, the visitors’ control of the game almost yielded the expected result in the 20th minute when Michael Okolo’s pass found unmarked Chimezie Kelechi at the edge of the but his effort at goal went inches wide.

Four minutes after, Go Round FC responded as Maduka Junior’s low header was well saved by Araromi Ibukun who dived to the right to parry the ball out of danger.

Another goal bound effort came from Chimezie Kelechi having received a through pass from Stephen Adodo, however, the ball ricocheted off.

The second half saw a much physical hosts with numerous fouls. Two minutes into the game, Sanni Jamiu stung the palm of Go Round goalie with thunderous shot at the tip of the box.

A moment of scare occurred in the 68th minute as Go Round jostled for an aerial ball in Gateway United box, it took the over head clearance of Egrigba Nicholas to avert the danger.

With ten minutes to go, Go Round took the lead via a free kick at the very dangerous edge of the box converted by Chile Azu who stepped up and smashed the ball to the left hand corner of goal.

Gateway United committed bodies forward, resulting to an array of attacks while the hosts took cover with physical and defensive tactical play to protect the slim lead.

Gateway United will now welcome Abia Comets on Matchday 5 on the 21st Dec., 2019.