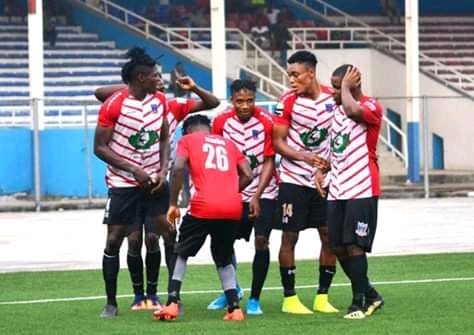 Plateau United were handed their first heavy defeat this season by Abia Warriors in Umuahia.

The Peace boys had only loss to Heartland FC with a scoreline of 1-0 before this encounter as they were tamed by the Umuahia Warriors.

Plateau United still maintains their top position despite the 3-0 bashing while Abia Warriors moved to 4th on log.

Orok Akarandut 51st minutes goal was enough for Akwa United to end Lobi Stars 8 games unbeaten as Fuad Ekelojuoti strike late to savage a point for Sunshine Stars and denied Dakkada FC their second away victory after Femi Ajayi put the visitors in front in the 42 minutes.

In other venues, Heartland fall to FCIU in Nnewi by a slim scoreline as Katsina United beat Jigawa Golden Stars in a 5 goals thriller, Wolves with their third win of the season while Adamawa chances of moving out the relegation zone were cut short as Rivers United walk away with all three points in Gombe to move upward to third on the log.