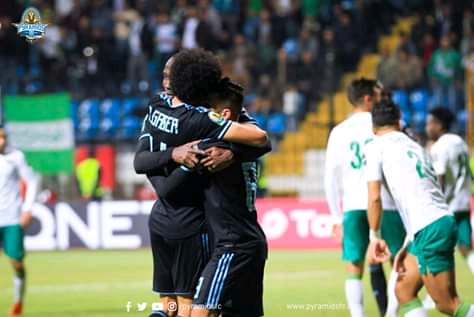 Rangers and Nouadhibou earn their first point after three matches. But both sides still have a mountain to climb on the road to the knockout stages with five points adrift second placed Al-Masry.

Enyimba failed to take advantage of their chances to brighten chances of making it to round of 16 as they drop to third place after losing to Paradou AC in Blida while San Pedro forced Hussain Agadir to 1-1 draw in Abidjan.

Hussain Agadir lead group A while Enyimba dropped down to third one point behind second Paradou.

ESAE of Benin Republic share spoils with Zanaco of Zambia in Port Novou while Berkane smash their guests to take their place at the head of the table with three points clear of Motema.

Horoya beat Djoliba with a lone goal to lead the group as Bidvest Wits search for a win continues.

Djoliba remains in second place despite the defeat while Bidvest Wits remains bottom of group C.

Pyramids maintains their unbeaten run with a derby win against Al-Masry while Rangers share spoils with Nouadhibou in Mauritania.