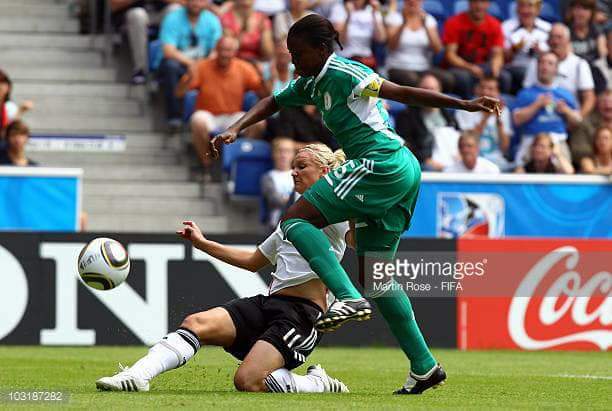 Overtime, people have often been judged based on their actions, track records or legacies. No doubt these are some of the factors that separate successful people from the never do well and justify the belief that leaders are not born but made.

The road to success and the road to failure are almost the same and success comes to those who are too busy to be looking for it.

No wonder the woman, Jegede Joy Imwonghomwen, having fore-sight chooses the road to success as she was busy looking for it.

Born on the 16th of December, 1991, in Benin City, Jegede Joy Imwonghomwen, started showing from a tender age that she will be a successful player.

Joy started playing football very early in life for Noiva Babes from 1999 to 2002 and won three trophies with the team.

Not done with the success she had with Noiva Babes, she went on to play for Pelican Stars from 2003 to 2004, where she won two trophies with the team. Joy had a blissful career as a footballer and in 2013, played for FC Bobruichanka in Belarus.

As a woman of many parts who loves to succeed in anything she does and also want to put smiles on the faces of her fans, which according to her gives her joy, in 2005 this towering, no nonsense defender joined Delta Queens Football Club and won nine trophies and left in 2017.

Not done with the successes she had with Delta Queens FC, Joy craved for more success and moved to Bayelsa Queens Football Club, where she also won three trophies (the 2018 NWPL title, the maiden edition of the NWPL Champions Shield and Queens Consult pre-season tournament in Akure, the Ondo State Capital).

HONOURS
Jegede Joy Imwonghomwen, was capped forty-four times, wearing the Green and White jersey of Nigeria. Joy Jegede was likened to Uche Okechukwu (the Gentle Giant), because of her size and height (1.72m).

She had so many honours playing for the national team. She was in the Nigeria Women’s U-20 team to the FIFA Women’s World Cup in Chile 2008 and in 2010, she captained the team in Germany, where they came second.

In 2012, Joy was in Nigeria Women’s Senior National team to the African Women Championship in Equatorial Guinea. She was in the Super Falcons team to the All African Games in Congo Brazzaville, in 2015.

This astute player captained the Super Falcons Team B to the WAFU Tournament in Abidjan, Cote d’ Voire, and the team finished in third position.

Jegede Joy Imwonghomwen, is a quintessential player, who have excelled more than her peers and whatsoever she set her mind to do she achieved.

To cap her illustrious playing career, this defense ace has completed a three month coaching course as she wants to give back to the game that brought her fame and fortune.

There is a saying: ‘You quit when the ovation is loudest’, and that was exactly what JEGEDE JOY IMWONGHOMWEN, has done as she has quit the beautiful game of football voluntary.

No doubt, Joy will be missed. And as she takes another challenge in life, one can only wish her well.