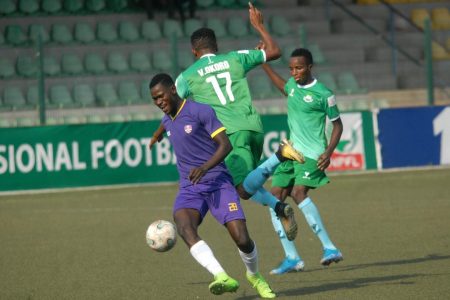 Nasarawa United started the year 2020 with an away to point to move one place up on NPFL log.

The Solid Miner’s whom had a better second half failed to capitalize on their chances to pick up their first maximum points on the road as MFM record their fourth home draw this season.

Defender Joshua Akpudge was the standout player in MFM’s defence, battling away anything that came near him and clearing off the line from Anas Yusuf’s late attempt at goal in the game.

Both goalkeepers were also impressive and had a busy day. At the other end of the pitch, MFM’s Clement Ogwu was anonymous until the second half, while Adeniji Adewole and Akanni Elijah missed good chances to score.

MFM moved up to 7th on the log with next game being away to Rivers United in Port Harcourt while Nasarawa United moved from 20th to 19th on the log as they will play host to visiting FC Ifeanyi Ubah on Sunday.