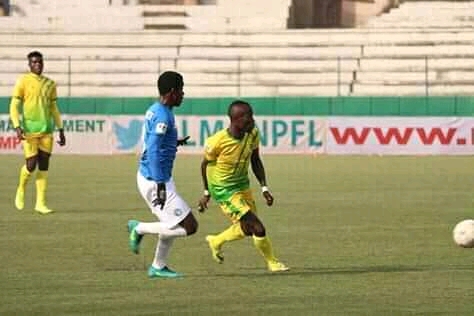 It was just the Peace boys day in an expected match between the league leaders and the defending champions which turn out to be an anti climax, Plateau still recovering from the 3-0 humiliation in Abia last weekend decides to humiliate another Abia team, Enyimba by four goals with Abba Umar scoring two quick goals in the space of 3 minutes to give the people Elephant one of their heaviest defeat in recent years.

Dakkada FC teach follow new entrants Adamawa Utd how to play, score, win and perhaps remain in the NPFL, the Adamawa boys are showing no signs that they can hold their own in the NPFL, Match day 12, earlier days one might want to argue, but every match counts.

In Kano Sai Masu Gida couldn’t hold on as the Seasiders rally at the dead through Charles Atshimene to secure a point at Kano, as Wolves snatched their third points on the road.

It was four penalties in Lafia, all scored, two for the solid miners and two for the visitors FCIU, a resurgent Nasarawa however are the lucky winners by 3-2.

Rangers hope of picking up their second win were dashed as the Flying Antelopes failed to hold on to their lead as Heartland bounced back to beat 2-1 in the Oriental Derby,

Wikki whom started well now struggling seriouslyhad to succumb to an 86 minute equalizer as they share spoils with Katsina United at the Pantami Stadium in Gombe while two goals from Ossy Martin’s and Nelson Esor Returns Rivers United to third on the table.

Lobi stars has been telling howsoever that cares to listen that this is their season, and they are working assiduously towards that, they send the Owena Whales back to Akure with two goals.

MFM, not doing very well at the moment, after a lack lustre draw at Agege to Nasarawa, the teams gets beaten by Coach Eguma’s lad in Port Harcourt.

Kwara begins to settle in the NPFL as they beat Abia Warriors by two also.

A not too good match day for all travelling teams save for Akwa United who beat Jigawa yesterday in Kano.