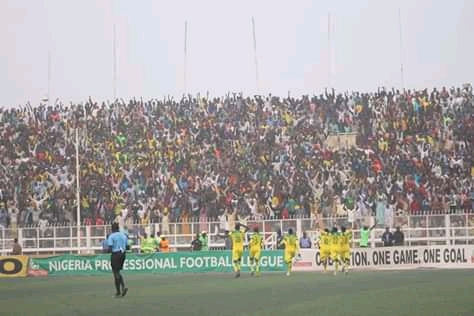 Lobi Stars returns to top of the log after 2-1 victory against Nasarawa United at the Aper Aku Stadium in Makurdi with goals from Chigozie Obasi and Samad Kadiri as the Solid Miner’s continues to languished at the bottom of the log.

In Uyo, the two Akwa Ibom teams bounced back to winning ways at home after losing their last home games to Nasarawa United and Kwara United.

While Dakkada FC beat Jigawa Golden Stars 2-0 in Saturday, Akwa United recorded a 3-1 victory against Heartland FC despite conceding first to maintain their place in the top 6 of the log.

MFM dropped another points at home as they were forced to a goalles draw at the Agege township Stadium while 10 man Katsina United survive FC Ifeanyi Ubah scare to pick up all maximum at home.

Elsewhere, Kano Pillars extend their unbeaten run to 12, the longest in the 2019/2020 season by coming back twice to force Sunshine Stars to 2-2 draw at the Akure Sports Complex, Wikki forced Rivers United to a goalles draw in Port as substitute Okon Otop 90 minutes goal for Abia Warriors denied Warri Wolves another point on the road.