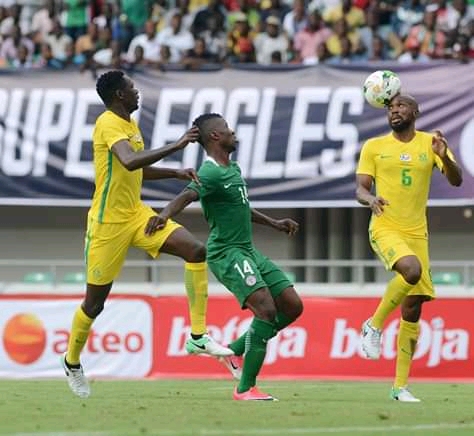 The Bafana Bafana of South Africa have had a difficult challenge whenever they meet the Super Eagles of Nigeria in any competitive games, but all that game to an end when both teams were paired in Group E of the 2019 AFCON qualifiers alongside Seychelles and Libya. The Super Eagles of Nigeria played host to Bafana Bafana of South Africa in Uyo in the first game of qualifiers in 2017, a time the Eagles where in their form of their lives. Bafana Bafana had hoped to give their new coach something to smile about as they took on Nigeria in a 2019 Africa Cup of Nations qualifier on Saturday evening. The clash signalled Stuart Baxter’s first back in charge of the South African national team following the sacking of Shakes Mashaba in December, and the 63-year-old opted for the tried and tested ahead of the clash. But two second half goals courtesy of Tokelo Rantie and Percy Tau, saw the South Africans claim a famous 2-0 away victory over Nigeria.

The victory which is South Africa’s first in a competitive match in Nigeria saw the Eagles start brightly. WIlfred Ndidi and Oghenekaro Etebo seeing early efforts just go wide. Kelechi Iheanacho also reacted too slowly to meet a pass by Iwobi with Khune acting as a sweeper-keeper and clearing the danger as the ended goalles at half time.

The resumption of the second half in Uyo saw the crowd stunned into absolute silence as Rantie broke the deadlock in the 54th minute. The attacker latched onto a sublime cross from Ramahlwe Mphahlele and squeezed his header past Akpeyi. The second goal came when Dolly fed substitute Tau before the half way line to leave the attacker free to run half a field to meet Akpeyi one on one.

The left footed wide man took out Akpeyi and slotted into the net to give SA a 2 – 0 victory as South Africa walks away with a 2-0 victory. The return leg in Pretoria ended 1-1 after the Gambia referee was faulted in his officiating by favouring the South Africa side.

Nigeria ended up as Group E winners despite losing their first game to South Africa, but the scores was settled in Egypt when Ekong Scored late to denied Bafana Bafana a place in the Semi finals after eliminating host Egypt in the round of 16.