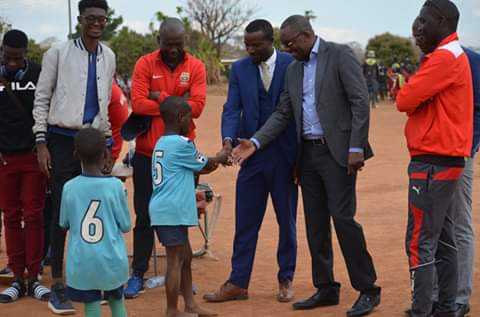 FAZ president Andrew Kamanga says the coming in of Milutin ‘Micho’ Sredojevic will galvanize the massive gains in the grassroots football structures that has seen the junior teams score a high success rate.

And Kamanga says it is unfortunate that some members have decided to resolve football disputes outside FAZ and FIFA statutes.

Speaking when he featured on live Sports Program on Chete FM in Nakonde, Kamanga said there were no shortcuts to success but continuous investments in the grassroots was key.

The FAZ chief said without harnessing the youth structures it would be impossible for Zambia to return among the elite of the African game.
He said that with Micho in place the successes at U17, U20 and U23 could be morphed into a successful Chipolopolo brand.
“We need to invest in all these junior teams because if we expose our players at an early stage, they will be able to have the confidence to compete globally as they grow,” he said.
“There is no shortcut to getting results without investing, the priority is to invest in junior teams with the hope that we will eventually get the right players from there who will be able to compete and also ensure that we continue getting as many of our players into competitive leagues in Europe.”

He added: “For instance right now our players are playing in some leagues in Europe. We have Patson (Daka) and Enock (Mwepu) in Austria, Fashion (Sakala) in Belgium, Emmanuel (Banda) and Edward (Chilufya) in Sweden and three guys in Russia but we do not have our players in the most competitive leagues which are the English, Germany Bundesliga and Spanish leagues. We hope that with the young players that are coming through at under-17, under-20 and u-23 those have the potential to break into European leagues.”

Kamanga said fruits of investments in junior teams had started being seen with the under-17 winning two cosafa titles under his reign while the under-20 had two regional Cosafa crowns and an AFCON title to their credit with the under-23 having been to the Africa Cup in 2019.

He said the stage had been set to consolidate on the gains in the junior structures.
“From that progression I think we are at a point where we are strong enough with the coming in of the new coach where we can quickly assemble a new team made up of players from u17, u20, u23, CHAN and of course those who playing in foreign leagues. We are at a point where we can now start moving forward and qualify to the 2021 Africa Cup as well as the 2022 World Cup,” he said.

The World Cup draws are out, it is just a pity that we are in this Corona situation so the qualifiers for AFCON and the World Cup have been suspended until the Corona is sorted out.”

Kamanga expressed delight with the progress made with the women teams.
“Coming to the women teams, we have done very well. If you look at where we are coming from, the Cosafa in 2017 they did well. In 2018 the senior team qualified to the AWCON where they came out third in the group. This year the women’s team did very well by qualifying to the Olympics for the first time,” he said.
“We are the best in Africa with regards that tournament (Olympic Qualifiers). In Cosafa the u17 girls were third, the u20 second and the senior team were runners-up. You can see that in all these teams the emphasis has been building from the bottom.”

Kamanga said, “We expect with the exposure our team will be getting from the Olympics, we will see more of our players getting an opportunity to go and play professional football in foreign leagues.”

Kamanga said the under-16 league that was being piloted in Lusaka would be spread to other provinces.
“When it comes to youth development we have gone further by re-organizing the under-16 league in Lusaka which we hope to replicate in the other provinces,” he said.
“We have also an under-14 league being tested, going forward, you can see that we are focusing on investing in junior teams to be able to get more players into the senior team.”

On the frozen electoral process, Kamanga noted that it was regrettable that some members found comfort in finding solutions outside the FAZ statutes.
“Ordinarily football being a game of rules, our rules are very clear, for instance FAZ and FIFA statutes do not allow members to go outside and go to ordinary courts of law because we do have our own internal processes on how disputes can be addressed,” he said.
“It is just unfortunate that some of the members have decided to go outside the statutes and get into the courts where they have managed to get injunctions.”
Kamanga said that provinces had benefitted from the constitutional changes as they had direct representation on the national executive committee.

He also said the decentralized structure would ensure that provinces play a part in the selection of national team players especially for junior structures.
“We also want to see u13, u15, u17 in Muchinga province through the structures we are putting in place. So that if we are selecting a national team for under-17 we will have choices to pick from all the provinces,” he said.
The FAZ chief said that FAZ was aiming to be financially independent in the long term through initiatives like the Chipolopolo bond.

FAZ has taken the first step by contributing a $15, 000 toward the $25, 000 salary of the Chipolopolo coach.
Government is topping up the $10, 000 for the coach.
The Kamanga executive has also increased the allocation to Super Division clubs from a measly K7, 000 to K200, 000 for all the clubs while National Division One clubs have a sponsorship deal with Eden University.