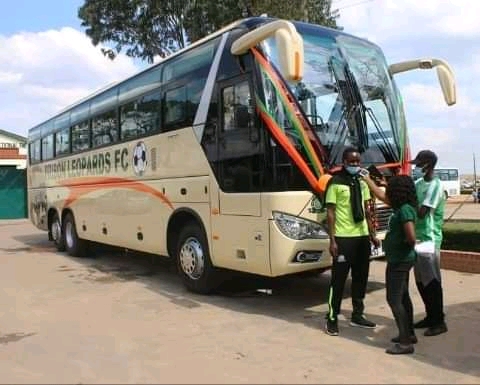 During his remarks as ZCS Director of Sports, Senior Assistant Commissioner Godfrey Mbewe thanked Power Tools Proprietor Mr. Mbachi for rendering help to the team in terms of transport.

“Commissioner General Sir, I will be failing in my duties if I don’t recognize one special person Mr. Mbachi of Power Tools for his support to the club. I would like to mention that since when we qualified to the Transitional Super League Power Tools came on board as our transporter and they have been very helpful and kind to us. We have moved with them to different places and we are very grateful for the support” Mr. Mbewe said.

Speaking at the same event, Power Tools representative Mr. Anthony Nkwazi thanked Commissioner General for having honored the company to speak at this special occasion.
Mr. Anthony who is also the son to Mr. Mbachi Nkwazi also revealed that the company has been enjoying good relationship with management at Zambia Correctional Service.

“The Commissioner General, ladies and gentlemen thank-you very much for honouring us to speak here at this special occasion. We’ve come a long way with Prison Leopards FC and it hasn’t been an easy journey, there was time when we couldn’t fulfil our promise due to some circumstantial challenges but we are very happy that we have been working together on this journey with you people. The Leopards have really made us proud and we are a company that takes pride in everything that they have been doing. We have been enjoying a good relationship with management at ZCS.
On our part, we shall continue working hand in hand with the Service”, said Mr. Anthony.

Delivering a vote of thanks on behalf of Prison Leopards Football Club, the Chairman Mr, James Nkoloma was very humbled and delighted for the motivation given to the team.
He also thanked the CG and his Command for the special gift.

Meanwhile, Mr. Nkoloma was also grateful for the presence of all stakeholders specifically from the Copperbelt business community who came to witness the special handover ceremony of the bus to the club.

“To BEM Motors, their gesture towards our team is unprecedented and we do not know what words we can use to thank them because it has hugely contribututed to raising the status of the club. The club is now able to attract professionals from other countries because of all these improvements that have come on board” Mr. Nkoloma concluded.

For the first time in its history, the club has been motivated with a luxury bus and this will surely go a long way in raising the status of the club. Prison Leopards FC are on the verge of bouncing back to premier, with 10 games remaining before the conclusion of the halted Inaugural EDEN University sponsored National Division One, Leopards are among the teams that are competing for top four finish and considered to be favorites of winning the League.