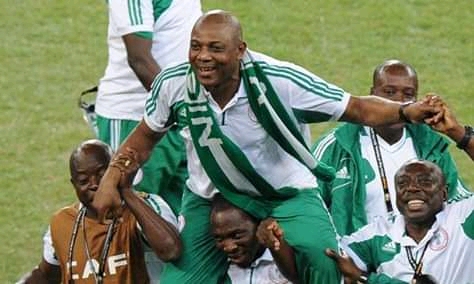 Is been four years since the death of Stephen Okechukwu Keshi and no coach, foreign or local is yet to surpassed his success achievement in Africa.

Late Stephen Keshi, The Former Super Eagles player is the one of the local coach in Africa to have managed three different National teams in Africa.

Keshi success story started with Togo national team where he managed the Hawks of Togo to their first and Only world cup tournament in 2006 in a group which consists of Senegal, Zambia, Mali, Congo, and Liberia in the qualifiers.

As a manager, Keshi achieved success by qualifying Togo for the only FIFA World Cup appearance in its history in 2006.

However, he left the position prior to the tournament and was replaced by Otto Pfister who didn’t last long with the Togolese team and Keshi was later re-engage by the Togolese FA in February 2007.

After leaving the Hawks of Togo in 2008, Keshi worked as manager of the Mali national football team, after being appointed in April 2008 on a two-year deal.

Keshi was sacked in January 2010, after Mali’s early exit in the group stages of the 2010 Africa Cup of Nations.

Stephen Keshi success story continues when he returns to Nigeria as the head coach of the Super Eagles of Nigeria.

Keshi became one of only two people, along with Egypt’s Mahmoud El-Gohary, to have won the Africa Cup of Nations as both a player and a coach.

Stephen Keshi also led the Super Eagles to the 2014 world cup in Brazil making him the only Africa coach to qualified two Africa teams to the prestigious FIFA World Cup tournament.

Not only that after missing out on the first two Editions, Stephen Keshi also took the Super Eagles home based team to their first ever CHAN tournament where they finished third in South Africa before taking the Super Eagles to the 2014 Brazil World Cup where the Eagles crashed out in the round of 16 against France.