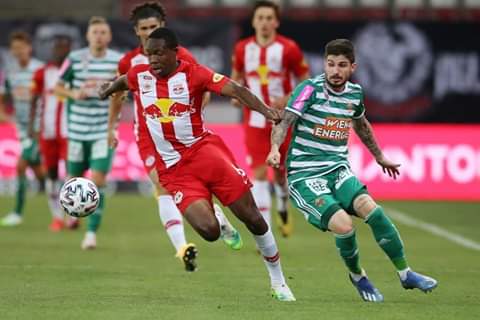 Austria based Enock ‘Computer’ Mwepu says he is happy with the game time he received in the 2019-2020 season for title winning Red Bull Salzburg.

Speaking in an exclusive interview with the FAZ media team, Mwepu says the more games he played made him confident enough to weigh in with some goals and assists for his club.
The mercurial midfielder was a regular feature in the Red Bull side that lifted their seventh consecutive crown in Austria is banking on a more successful 2020/21 season.

“It has been a great season, from the time we started until now. It has been great for me as a player, I am grateful that we are champions, I have made a lot of developments, I have played so many games this season. This is really massive for me that I can have this much game time, I am really happy,” he says.
“Playing a lot of games have given me a lot of opportunities to showcase my skill, scoring and assisting and also being a leader in the team. This has been a great impact for me this season.”

Mwepu says should a move for a bigger club come through he would always be ready as long as it guaranteed playing time.
“I am always ready, if there is a chance that Liverpool or Real Madrid come or any team that has assured me that they will give me game time, I am ready for it,” he enthuses.

Mwepu is currently in the country of the off-season break after having helped Red Bull Salzburg lift the Austrian Bundesliga.