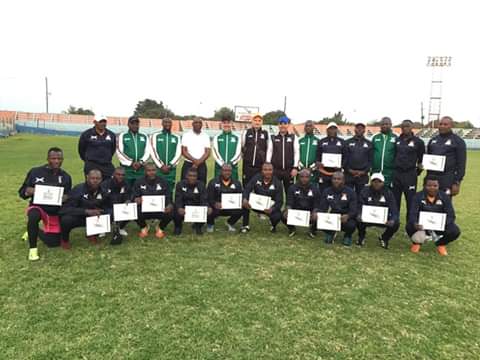 Speaking during the official opening of a Goalkeeping Course for coaches from the Super League and National Division One, Kamanga said coach education was a catalyst for football development.

Kamanga said the program will was the first of many that will also be spread to lower division clubs.

“We hope that this program will kick-start a long term investment in not only goalkeeping but coaching general. We have a long term plan for coaching that will galvanized by having a coaching school that will be set up with the help of partners in Croatia. We also have a similar agreement with our partners in Morocco,” he said.
“We are mindful of the fact that government desires that Zambia ultimately is managed by a local coach. But before we get there we must be willing to invest in the capacity of our local coaches.”
Kamanga said investing in the grassroots speaks to the 10-year strategic plan.

He said that coaches for different age groups will be trained.
“This also speaks to our 10-year strategic plan where we are building football development from the bottom where we are saying for the next 10 years where do we want to be. All the players we want to develop is where do you want to be in the next 10 years will fit into that program,” he said.
“We need to think about having coaches who eight years old are going upwards.”

Chipolopolo coach Milutin ‘Micho’ Sredojevic thanked Kamanga for being supportive of football development.
Micho said success could happen by accident but it was important to plan for.

FAZ will train coaches across the country with Lusaka kicking off the three-day exercise that will move to Central Province before being wound down in Ndola.

Goalkeeper coach Miroslav Stojnic is at the heart of the program having already left a footprint in his native Serbia and other European countries he has previously served.

The goalkeeper will identify promising goalkeepers in the country that he enrol under his national academy with the possibility of feeding them across national teams.

Coach education is part of the Kamanga presidency inspired 10-year strategic plan that has put grassroots football at its core.
FAZ Technical Director Lyson Zulu ran the participants through the FIFA Contract of Agreed Objectives under technical.

Every developmental project that FAZ undertakes is embedded in the contract of agreed objectives.