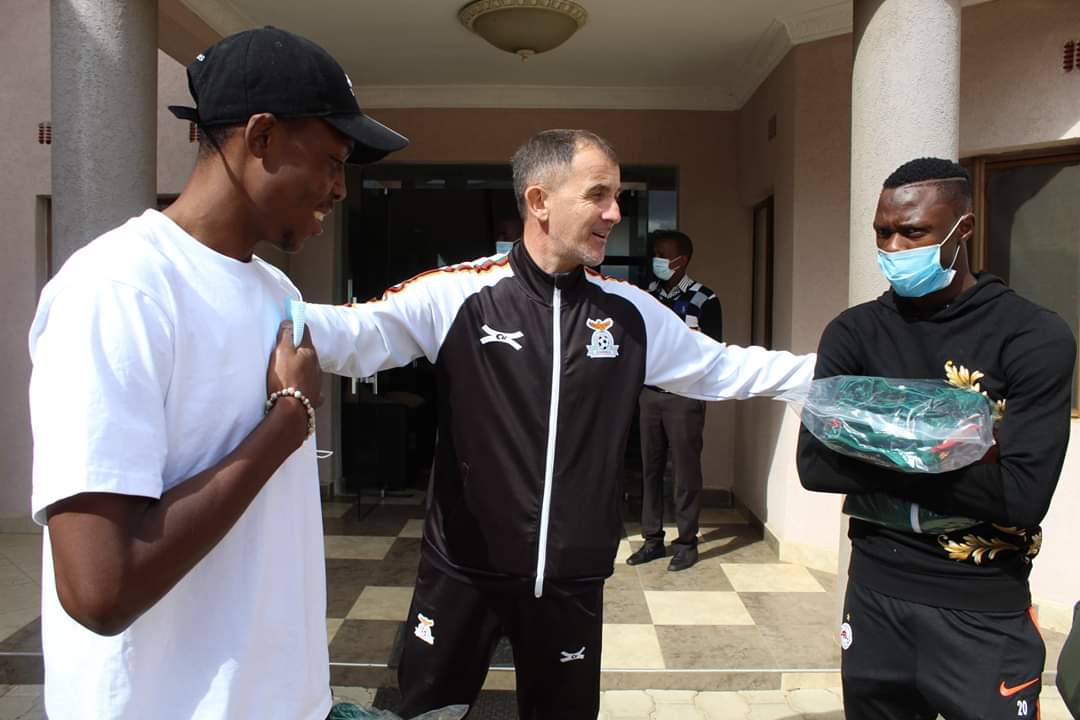 The head coach of the Zambia national team ‘Micho’ Sredojevic had a heart-to-heart talk with the Austria based duo of Patson Daka and Enock Mwepu before they returned to their base.

The duo has since left for their base where they will link up with their teammates for the pre-season which commences on July 29.

Micho noted that the two players have become great ambassadors of Zambia due to their consistency on and off the pitch which saw them play a huge role in the club’s Austrian Bundesliga and Austrian Cup triumph.

The Serb took Daka and Mwepu through his seven step technical master plan with qualification to the 2022 World Cup in Qatar the final target, before acknowledging that the duo’s involvement will be key in realizing the developmental and competitive objectives set out.
“We have a lot of work ahead of us including the AFCON qualifiers and World Cup qualifiers for Qatar 2022 against Mauritania, Equatorial Guinea and Tunisia. Where we are right now in the seven step plan is to put the foundation that will lead the pyramid all the way up to fulfill our ambition and you two (Patson and Enock) are very important professional players in your club and we request you to keep in mind the Qatar dream that is supposed to be also yours,” said the Serb.
“We believe that you, together with others are part of the set-up that is supposed to turn this (World Cup) dream of 18 million Zambians into reality. Let us play an attractive brand of football that Zambians will love to see from the body language which will carry the national team jersey with pride’

Apart from presenting the pair with Chipolopolo national kits and blessing them ahead of the 2020/2021 season, the Serbian Wolf formally introduced the pair to his technical staff comprising first assistant Dushan Stojanovic, local assistant Oswald Mutapa and goalkeeper coach Miroslav Stojnic.

Mwepu expressed joy at meeting the Serb whom he praised for sharing his ambitions, tactics, and system of play that he would love to see in the national team.
“We had a great time with him and he explained what he wants us to do and we are just looking forward to seeing how we can work everything out but it was successful meeting,” an elated Mwepu said.

“He is a coach who wants to help the national team win for the fans, players, FAZ, government and everyone else involved. He wants to create a relationship where everyone is able to support each other, love one another and play one game.’
“I love his gesture and courageous words and I just pray that his plans and systems during his tenure be successful. Myself and other players are looking forward to help, work with him and give him what he deserves, I think we will have a great time with him,” the Red Bull Salzburg midfielder added.

Mwepu’s teammate and striker, Patson said it was a huge honour and privilege to finally meet Micho after many months of telephone conversations.

Early this week, Salzburg launched a title defense mission which will kick off with their first training session on July 29, 2020.

“I feel like this time, I just have to pick it up from where I left’
The duo has since left for Austria after their two weeks break in the country.