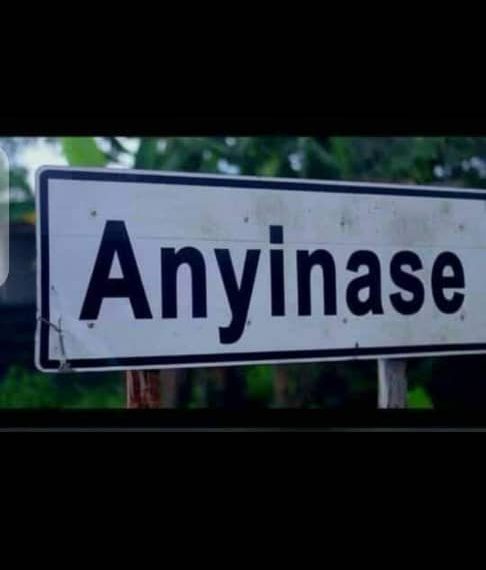 Aiyinase(Enyenra bo) literally means “Under the Silk Tree ” is a community in the Ellembelle, a district in the Western Region of South Ghana.

Aiyinase lies 90 kilometers of the port city of Sekondi-Takoradi, the commercial capital of Western Region.

Nzema Aiyinase has as 2015 settlement population of 10,719 people, arguably the most populous community in the district followed closely by Esiama [7,874].

HISTORY
Aiyinase is believed to have migrated from the southern part of Ghana, where they use to do normal farming but settled down after discovered the land as good and “fertile “for farming especially where the big silk trees are found.

The Community became popular in 1962 through their farming and trading activities.

STRUCTURE
The town of Nzema Aiyinase is divided into four parts: North,East ,West and south Aiyinase.

Crosby Awuah Memorial Park, the home grounds of Premier league side, Karela United- lies roughly on the division between the two parts, but closest to the main entrance to the community with the area known as “Ewiakɛle”(Sunny area).
Aiyinase is governed by a political District Chief Executive of the Ellembelle District Assembly.

ECONOMY
The economy in Aiyinasi is basically based mainly on farming fleet and two market days ( Tuesdays & Fridays ) making it the best commercial and busiest community in the district. The area also has coconut, cassava and rubber plantations.

RELIGION
80% of the people are Christians,15% moslems with the remaining 5% for other religion.
There are over 20 churches in the community. Thus Roman Catholic, Methodist, Pentecost, Anglican, Presbyterian,Action church and many more.

CHIEFTAINCY
The current chief is Nana Etwekpanyinli VI, historically the 6th chief of the stool.
The palace is at the centre of the town.

CULTURE
In every October, the town celebrate Kundum which is used as a medium to thank their ancestors for the abundance of food at the time of the harvest, coinciding with the best farming period of the year; people come to Aiyinase for the festivities to do trade.

TOURISM
There is a wonderful sites in Aiyinase(The Aiyinase North) .The very place around the area perched on a hillside, is an exuberant nature has no equal in Ghana.
They also boast of top class hotels like Wantapa hotel annex, Melvina Lodge, The base hotel and Town hotel.

LANGUAGE
70% of the community speaks their local dialect Nzema,30% speaks Twi/Fanti/French or English.

LOCATION
The community shares boundaries with Menzizor from the west, Basake in the east , Nyamebekyere on North and Awiaso- Akoto to the South.