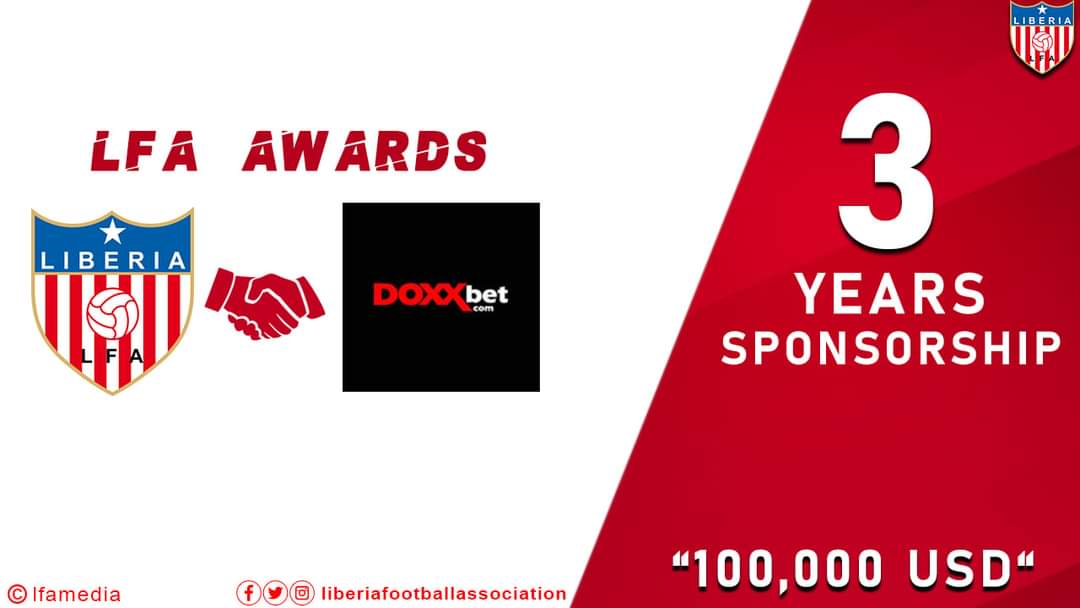 The Liberia Football Association (LFA) and Doxxbet-Liberia have signed a three-year deal, valued at US$100,000 and subject to renewal, to sponsor the individual awards beginning with the Orange 2020/2021 season.

The ceremony took place in the boardroom at the Antoinette Tubman Stadium (ATS) on 10 August.

Others are the best official and electronic media and social media coverage.

The MVPs in the men and women’s divisions will receive a car plus L$150,000 respectively.

LFA President Mustapha Raji thanked Doxxbet for renewing the deal, which was first signed in April 2019.

Raji also praised the executive committee and stakeholders for their continuous support to develop and improve football.

“To the executive committee, we appreciate your continuous support. The media and marketing committee chairman Kelvin Bayoh and co-chairman Quiwu Yeke all worked to ensure that we have this agreement finalized with Doxxbet-Liberia.

“To Doxxbet, we like to say thank you very much. We appreciate your support in this difficult time, Covid-19, for a company to join hands with football, focusing more on the youth, individual awards for the first time in the history of Liberia [and] to support football in this difficult time.

“We all understand that it is something that shows you have a paa passion for football. It shows that you have loa ve for Liberia and love for Liberian youth. I will like to say a big thank you for believing in the football association and for extending this sponsorship deal,” said Raji.

President Raji appealed to the Liberian government to give more opportunities to companies like Doxxbet that sponsor sports so that they can reinvest and their profits by providing more corporate social responsibility.

For his part, Doxxbet-Liberia chief executive officer Michal FrFrolloaid they got interested in sponsoring Liberian football awards following several consultative meetings and a final presentation by the LFA.

“As long as our company will be doing business in this country, we will be dedicated to supporting football [in Liberia]. We will definitely never be decreasing the amount. We will continue to increase it,” revealed Frollo.