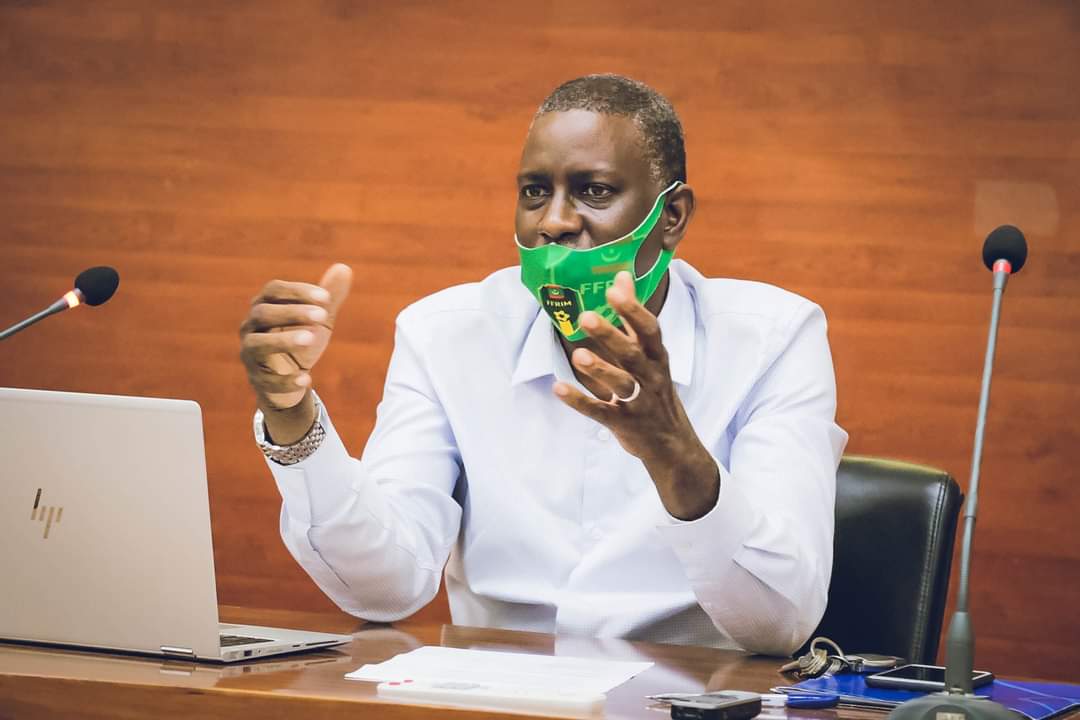 Mauritania Football federation is set to resume football activities After the green light from the health authorities last week Thursday, as the National Football League organized meetings on Saturday 8 and Sunday 9 August at the football headquarters of the FFRIM, in order to consult with all the parties involved to examine the contours of the recovery.

The conclusions of the simplified health protocol and, subsequently, to proceed with the rescheduling of the remaining matches of the 2019-2020 season, in particular the last seven days and the late matches of the Super Division 1, as well as the President’s Cup.

The Mauritania FA also gave an optimal resumption of sports activities, all clubs must each sign a commitment to scrupulously respect to the terms of the protocol, by which:

– They certify that they have been informed of the risks of non-compliance with the instructions issued
– They undertake to respect all barrier measures (wearing a mask, using hydro-alcoholic gel, social distancing, among others …)
– They adhere to medical surveillance without omitting or concealing clinical signs
– They must inform their club or FFRIM doctor of all previous or new health problems

Also, clubs and match officials must follow the procedures laid down both in training and during matches. While the LNF will provide the clubs with materials for taking temperature.

The federation also gives guidelines to clubs on the training of the teams and the referees which will take place behind closed doors and will begin from today Monday, August 10, under certain conditions below.

– The exercise should be done outdoors
– Only 35 people (players and staff) are allowed to enter the training venue
– Wearing the mandatory mask for all people admitted to the training site
– The temperature must be taken by the club trainer at the entrance to the stadium before each training session, under the supervision of the FFRIM Medical Commission

Resumption of competitions behind closed doors

The return of competitions in Mauritania is scheduled for Friday, September 4, 2020. All matches will take place behind closed doors. The resumption concerns the championship (will last 7 days) and matches of the Super Division 1, the quarter and semi-finals of the President’s Cup, the Super Division 2, Nouakchott zone (will last 6 days), the three zones of the domestic and regional championships.

Another method adopted by the Mauritania football federation on the resumption of competitions, with measures to be implemented to avoid any risk of contamination with COVID-19:

– Kick-off for early matches is 5 p.m. GMT
– Only 35 people (23 players, 12 staff members or managers), for each team, are authorized to access the stadium on match day
– The temperature control of any person having to access the stadium (players, staff, managers, officials, etc.) will be carried out by stewards trained in this task
– Wearing a mask is compulsory for all persons present in the stadium, except for players and referees when they are on the playing area
– The social distancing of at least 1 meter is required for all people outside the playing area
– Hugs, hugs and handshakes are not recommended

The LNF has also indicated that all groupings are prohibited and all stakeholders must bear in mind the respect of barrier measures to avoid possible contamination. Finally, in terms of competition regulations, 5 changes instead of 3, in three phases, will be authorized during the matches.

For its part, the Medical Commission also ruled on what to do if a suspected case of COVID-19 is discovered:

Continued on Sunday, the work was completed with the establishment of the new fixture list for the 2019-2020 season, the epilogue of which is scheduled for October 18, 2020.

The game between ACS Ksar and the Nouakchott King’s will mark the return of Super Division 1. It will be followed by the clash between ASC Tidjikja and FC Tevragh-Zeïna.