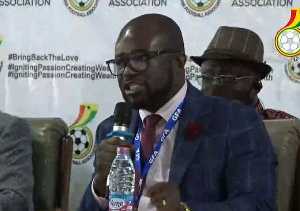 The Congress of the Ghana Football Association (GFA), has approved emoluments for the leadership of the association as recommended by the Frederick Moore committee.

The three-man committee that had Delali Senaye (CEO of Inter Allies) and Sampson Nartey-Yoe (Financial consultant and lecturer) as members proposed that President Kurt Okraku be given a monthly salary of ¢12,000, Vice President ¢7,000 Mark Addo and ¢4,000 each for the rest of the Executive Council (ExCo).

Other emoluments such as per diems of $500 and $400 per day for foreign travels of the President and Vice President respectively were also proposed to the decision-making body of the FA.

For ExCo members, $300 was suggested for their foreign travels.

Also, a sitting allowance of ¢1,600 for ExCo was tabled before Congress. These proposals were met with objections from a section of Congress led by JF Mensah and Alhaji Grusah.

However, members voted in support of the recommendations, when they reached a consensus that a well-remunerated leadership would yield better work output for the development of Ghana football.

Also approved by Congress was a decision of the committee to end payment of ex-gratia to members of the Executive Council as previously practiced.

As reported by Joy Sports last month, that the Executive Council prefer Baker Tilly Andah & Andah as their auditing firm.

The ExCo proposed the auditing firm who were scored 35 points with the commentary of ‘although the firm presented the 2nd highest audit fee [GH₵ 45,000], it had the overall audit experience as well as the only company with sports and football audit background.’

“The firm has a reputable name in the audit industry in Ghana and they are offering a very competitive price, ” the GFA noted.

Congress unanimously approved Baker Tilly as their auditor for the next three years.

Nana Yaw Amponsah, CEO of Kotoko expressed about the budgeted expenditure, saying that they can not spend without saving.

But, Vice President, Mark Addo said they wished for more if the finances were available.