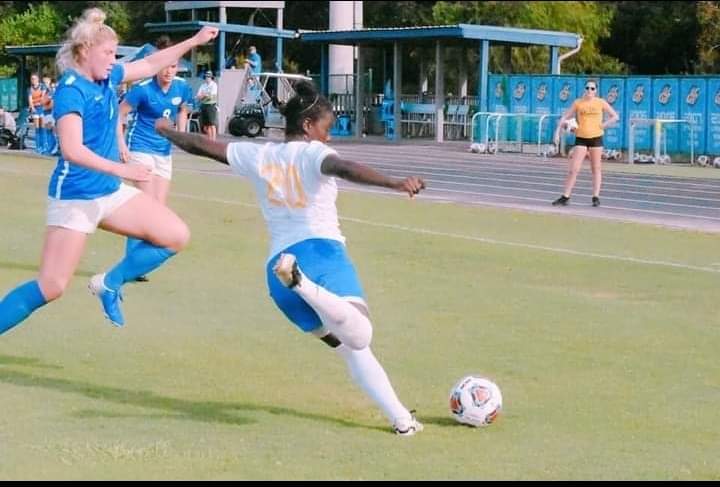 The Namibia Football Association, NFA media caught up with Brave Gladiators defensive midfielder Lovisa Mulunga, who just a few weeks ago, returned from the United States where she is pursuing her Masters in Business Administration (general track), at the Albany State University.

Mulunga who plays both central defender and defensive midfielder for the Albany State University’s d2 soccer team will be in Namibia for four (4) months, before returning to the States for her spring semester commencement in January 2021.

Speaking on challenges she faces as a student footballer due to COVID-19, Mulunga says cancellation of face to face classes have by far been her only academic challenge; limited to no interactions and having to adjust to online classes.

“Football-wise, our entire fall season has been called off and the team will not participate in any d2 games. All the matches have however been moved to next year, something I view as light at the end of the tunnel during this dark time.” Mulunga said.

She further adds that her level of fitness has not been the same since the closing of gyms and all contact sports as training sessions with their coaches also had to stop, nonetheless she trains on a regular to avoid falling behind on fitness.

On the impact of Covid-19 on women in football, Mulunga revealed she believes the pressure and blow off the pandemic weigh more on the junior teams.

“The thought of not playing the sport they love and enjoy is most likely to cause stress and anxiety, which in turn might shift their attention from their goals and everything else they have achieved so far, to less productive activities. My biggest hope is for this pandemic to come to an end so we return to our normal way of embracing our diverse talents, in our respective sports codes.” She concluded.