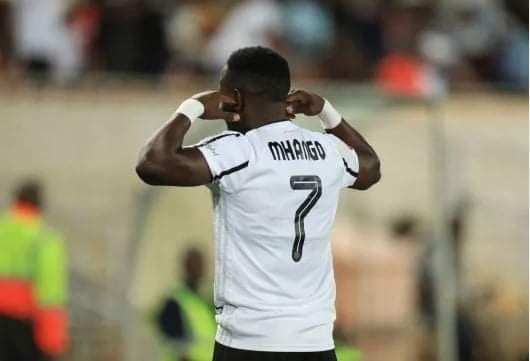 Mhango netted his 16th goal in Pirates’ 1-0 win over Stellenbosch on Saturday the last day of the season to tie with his nemesis Highlands Park Namibian striker Peter Shalulile.

The two players stepped into the pitch tied at 15 goals apiece but Gaba was the first to hit the target just before half time as he pounced a rebound after a move he initiated from the left flank before drifting inside.

Shalulile on the other had was put on leash by Amazulu defence and failed to hit the target in open play until the 88th minute when he converted a spot kick to salvage a point for his side as well as claim the Golden Boot for the first time for a Namibian as well.

Gaba, who moved to Pirates from Bidvest Wits in June 2019, took the Buccaneers by storm netting 14 goals before Covid-19 pandemic forced the PSL to a halt in March.

The long break numbed his legs as he went seven matches without a goal, prompting doubts as to whether he would be able to beat competitors as such as Kaizer Chiefs’ Samir Nurkovic, AmaZulu’s striker Bonginkosi Ntuli and Shalulile.

But the former Nyasa Big Bullets striker proved his critics wrong as he managed to score in the last two matches with Shalulile hot on his heels.

Meanwhile, Mamelodi Sundowns are champions for the third time in a row after leapfrogging Kaizer Chiefs on the final day.

Sundowns were 3-0 winners over Robert Ng’ambi’s Black Leopards on the final day while Amakhosi played to a 1-1 draw with Gerald Phiri Jnr and Richard Mbulu’s Baroka FC.

It was Phiri Jr’s in-swinging free kick that denied Chiefs the title as Manuel Kambala rose to nod home to make it 1-1.

Malawian coach John Maduka has finished the PSL unbeaten ever since taking over as coach after sailing to a comfortable 3-1 victory over Maritzburg United.