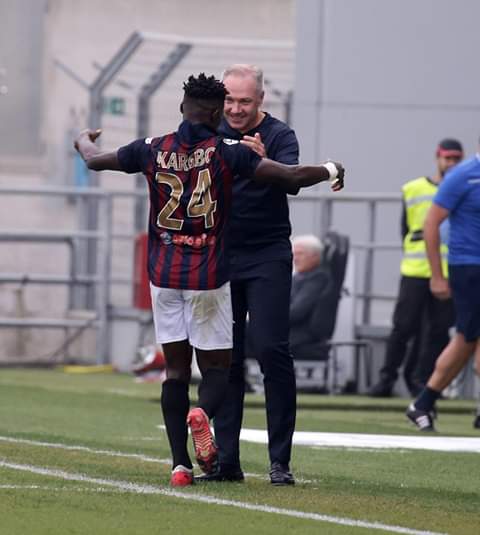 Serie A side FC Crotone have  announced on Tuesday that Sierra Leone  sueper star striker Augustus Kargbo will return to Serie B side AC Reggiana 1919 until the end of the season with a redemption clause.
Having helped the Reggiana 1919 gain promotion to Serie B, Kargbo, 21, has admitted he was pleased with his return.
The striker, who made his Serie A debut in 4-1 defeat at Genoa says he ‘its feels like home at Reggio Emilia City.’
It was his winning goal over Bari at the Mapei Stadium Città del Tricolore in the Serie C playoff final on July 22 helped Reggiana gain Serie B promotion.

The goal was his tenth in twenty-four appearances while on loan last season.

“I was pleased, it’s really nice to be back at my second home with the lads,” Kargbo to FSL UK.

He made his debut return on Wednesday in the second round of the Copa Italia in 4-3 shot out win over Monopoli after a 1-1 draw over 90 minutes.

“I was also happy with my Serie A debut, but I came back at the right time because I started a good course here now I am looking forward to continuing where I left off last season.”