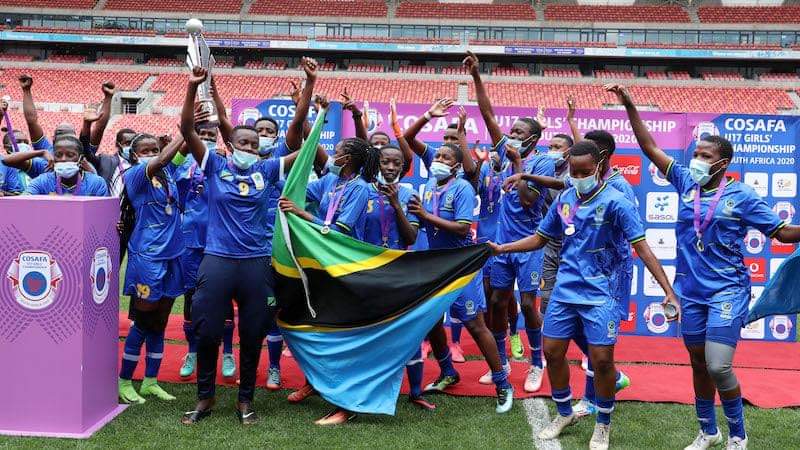 Tanzania from East Africa became the queens of the South for the second as they were crowned champions of the COSAFA Women’s Under-17 Championship after a dramatic penalty shoot-out win over Zambia in the final.

The East African guest nation also holds COSAFA Women’s Under-20 Championship title from 2019, a competition that could not take place this year due to the COVID-19 pandemic, meaning they have the trophy from two age-groups in their cabinet in Dar es Salaam.

Zambia looked as though it would be they who would triumph though following Comfort Selemani’s super solo goal after 18 minutes.

They led right up until the 93rd minute, but when Tanzania were wasted a penalty in injury-time, the prolific Aisha Masaka stepped up to convert and send the game into a post-match shoot-out.

Tanzania held their nerve under the pressure of penalties and triumphed 4-3 to become the second East African guests to lift the Under-17 prize after Uganda won the inaugural competition in Mauritius last year.

Zambia’s Tisilile Lungu won the Player of the Tournament prize, while to Golden Glove went to her teammate, goalkeeper Chitete Munsaka, as the side conceded just five goals in the competition, the fewest of all the teams.

Masaka of Tanzania lifted the Golden Boot trophy with her 10 goals, while Zambia claimed the Fair Play Award.