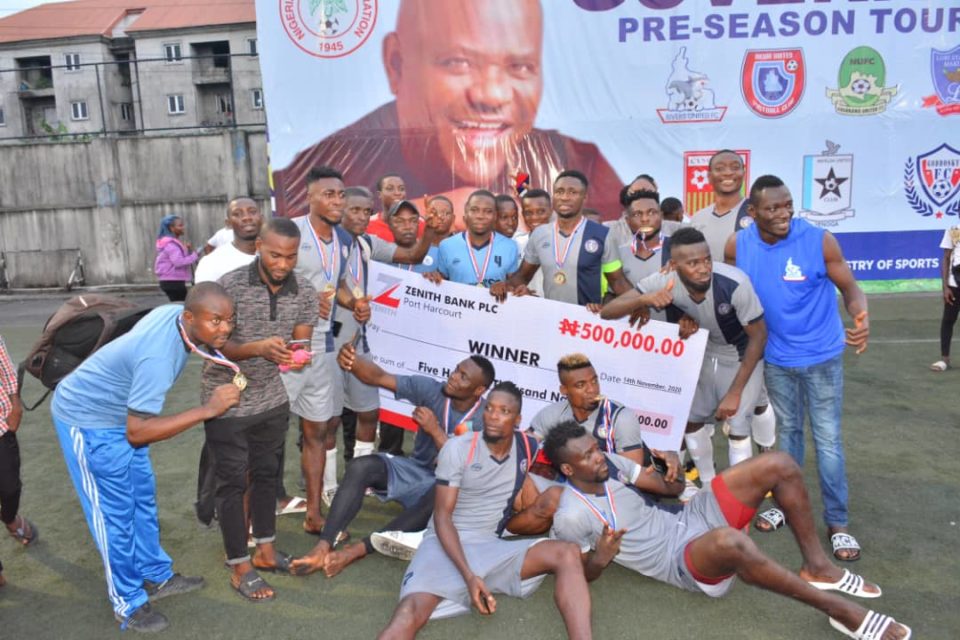 Christian Mizo silenced the home fans at Sharks Stadium with the curtain-raiser on Sunday.

Substitute Chika Godwin weaved past his man and sent the ball to the roof for the equaliser to send the home fans into a frenzy.

The full-time score stood at 1-1 even as both teams tried to outwit themselves while trying to take their chances during the game.

The Pride of Rivers had the better of the game as they dominated play in the first half missing several scoring chances.

Cletus Emotan was the star man of the game as his dribbling skills were a delight to close to 3000 fans that watched the epic final.

Bayelsa also created chances of their own but the Pride of Rivers’ backline was solid.

Both teams then had to decide their fate via penalties after the referee signalled the end of the game at 1-1.

The result saw the Stanley Eguma managed team winning 5-4 on a shoot out, then claiming the trophy of the 2nd edition of the Governor Wike Pre-Season Tournament.

Bayelsa United forward Okardi Inukurogha was named at the most valuable player of the tournament, with MFM’s Clement Ogwu picking up the top scorer’s award with three goals.

Giant killers Ottasolo International FC were named as the best team of the Tournament.