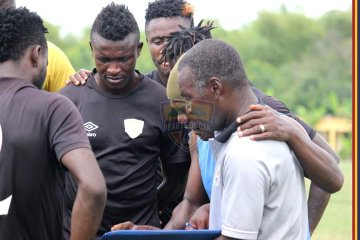 Accra Hearts Of Oak had their last lap of preparation towards their season opener against Ashgold in a friendly against camp host, Glow Lamp Soccer Academy.

The Phobians thrashed the academy side 3-0 as they rounded up their exercise in Cape Coast.

Coach Odoom’s side will open their season on Tuesday in a titanic clash against the Miners at the Accra Sports Stadium.

After their first game against Aduana Stars was called off they had to engage themselves in a final preparatory game.

Striker Kojo Obeng Jnr grabbed a brace on the afternoon with Emmanuel Nettey scoring the other goal to make it 3-0.

The team is expected in Accra by Monday ahead of their 2020-21 season opener.