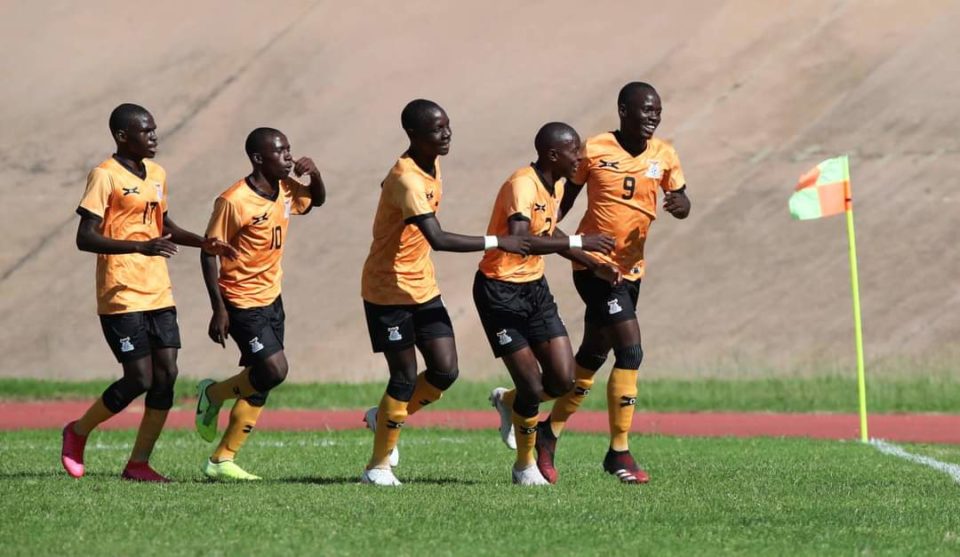 The Zambia under-17 Men’s National Team face the Amajimbos of South Africa in what is a potential dress rehearsal of Sunday’s final.
South Africa have not confirmed their place in the final yet, but are in good stead to join Zambia in Sunday’s show that will mark the close to the tournament that has seen four teams battle for honours after other teams were booted out due to age-cheating.

The 2020 Cosafa edition is critical as it also acts as a qualifier for the Morocco 2020 Africa Cup of Nations.
Zambia has already secured its ticket to Morocco after commanding performances against Angola whom they beat 2-1 and Malawi who were handed a comprehensive 6-2 thrashing.
The tournament was re-formatted to a round-robin basis with the top two qualifyings to the final and book tickets to the AFCON.

Zambia coach George Chilufya is backing his boys to make it three wins out of three matches when they face South Africa at the 2020 COSAFA Men’s Under-17 Championship at Gelvandale Stadium this afternoon.

Despite having already reached the finals and secured a ticket to the 2021 Morocco Africa Under-17 Cup of Nations tournament, Chilufya has cautioned his players against complacency heading into the final round-robin fixture against the hosts.

The defending champions kicked off the campaign with a 2-1 win over Angola on Sunday before thrashing Malawi 6-2 on Tuesday to qualify to the finals with a game to spare.
“Having qualified to the both the junior AFCON and the COSAFA finals, we should just make sure that we still maintain the winning record at this tournament,” Chilufya said.
“There is no time to relax, we need to maintain the same discipline and remain focused all the time because we still have a very big task of defending the title and win it with a 100 per cent record.”

Chilufya has hinted on making changes to his starting eleven which was unchanged in games against Angola and Malawi – clearly showing his intent to have his influential players fully fresh for Sunday’s final.

“We already have six points in our bag, probably we would love to see other players as well because we picked the best 20 players and from the 20, we can pick anyone and I am sure they are all ready for the game,” he said.

The Young Chipolopolo’s opponents, South Africa, only need a point to add to their four points to qualify for the finals, but a loss will be enough to send Amajimbos thanks to a better goal-difference they have over third-placed Malawi.

The Junior Flames will need to score five unanswered goals against Angola and hope for a South Africa loss against Zambia to stand a chance.