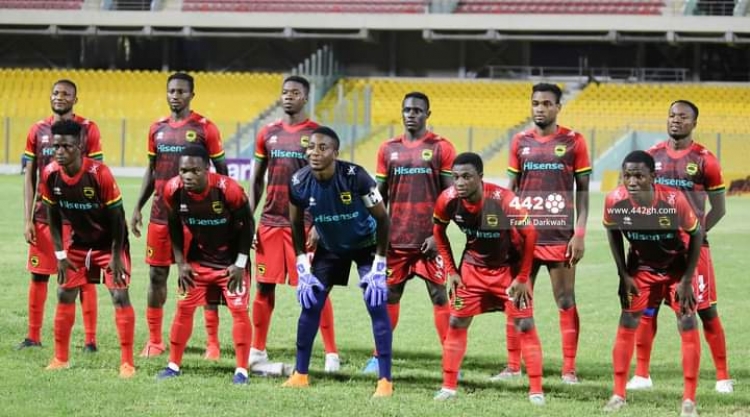 Things are not exactly rosy for the Porcupine Warriors domestically at the moment- they are winless in two games but there is much hope that the Ghanaian giants will edge past the opponents and advance to the next stage of the competition, where they will be confident of progressing further.

With that in mind, here’s a lineup that should start against FC Nouadhibou on Sunday.

Kwame Baah (GK) – With Felix Annan sidelined due to injury, Baah is expected to edge past Razak Abalora and claim the number one spot. He’s a reliable performer and will undoubtedly be called upon to make some big saves to keep Kotoko at bay.

Christopher Nettey (RB) – Had a great privilege of featuring for the Black Stars recently against Sudan. Often underestimated, but now a firmly established player in Kumasi.

Abdul Ganiyu (CB) – Ganiyu is a crucial part of this Kotoko side and has featured in all of the Porcupine Warriors games this season. He has come on leaps and bounds since his return from injury and will expected to continue on Sunday.

Wahab Adams (CB) – With strong performances from both Abdul Ganiyu and Habib Mohammed, game time has been hard to come by for Wahab Adams this season. But a suspension to Mohammed means he will likely return to the side on Sunday.

Ibrahim Imoro (LB) – Imoro is growing in stature with every passing performance for Kotoko and will be looking to put in another assured display on the left.

Emmanuel Keyekeh (CM) – Keyekeh impressed during his time with Karela United and has quickly made himself undroppable in Kotoko’s engine room.

Sulley Muniru (CM) – Yet to get off the mark for Kotoko, Muniru is a creator in midfield with a superb passing ability, Muniru Sulley will be responsible for dictating the tempo and possession of the team. He has a lot to offer.

Emmanuel Gyamfi (RW) – Hasn’t been able to hit the same form he managed last season, but still, Gyamfi offers pace in attack and that is crucial in stretching defences. Capable of playing through the middle or out wide as a winger, his flexibility will come in use for the Kotoko team on Sunday.

Godfred Asiamah – (LW) – With Augustine Okrah not available for this fixture, Asiamah will likely be chosen to replace him up front. He had a decent game against Berekum Chelsea and is buoyed to replicate same performance against FC Nouadhibou. His work-rate and speed could make him an unlikely hero for the Porcupine Warriors.

Ibrahim Osman (ST) – Now could be the perfect time for Osman to make his mark. Konadu will want to put the game to bed pretty quickly, and the striker certainly knows where the back of the net is.

Kwame Opoku (ST) – Opoku will be Kotoko’s danger man going into this game. The former Nkoranza Warriors forward has burst onto the scene and gained the full backing of the manager and the supporters of the club, and he will be their main threat winning the game on Sunday