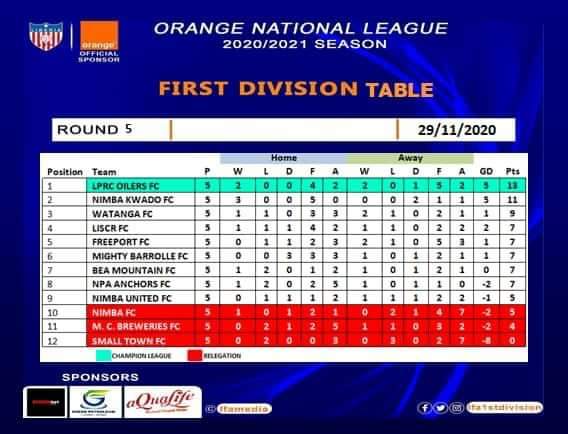 A top of the table clash will be the spotlight on match-day six in the Orange first division on 6 December.

The Oil Boys, who are the defending champions, have 13 points, two more than the Ton Pea Boys as they battle to keep their unbeaten runs.

Freeport FC have promised to sport a yellow jersey for their meeting with Mighty Barrolle in a bid to recreate the Invincible Eleven (IE) versus Barrolle rivalry at the ATS at 3:30PM.

Small Town go in search of their first point against a Monrovia Club Breweries, who have lost three games in a row in a relegation clash at the George Weah technical center in Careysburg at 3:30PM.

LISCR FC will hope to make it three wins on the bounce when they take on Nimba United at the Samuel Kanyon Doe sports complex at 3:30PM.

And NPA Anchors will take on Watanga FC at the Nancy B. Doe Stadium in Kakata, Margibi County at 3:30PM.