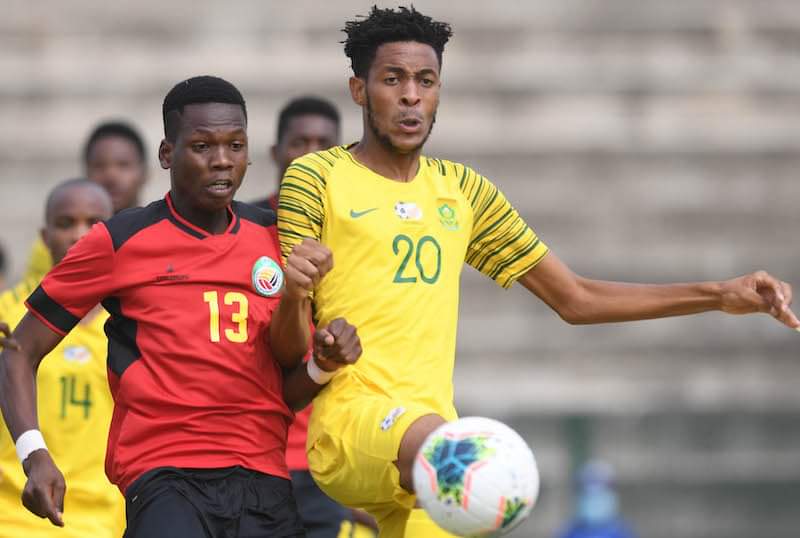 Mozambique and Angola have sealed their place in the semifinals of the COSAFA Qualifiers for TOTAL U-20 AFCON, Mauritania 2021 but hosts South Africa are out in a major surprise in Nelson Mandela Bay on Tuesday.

South Africa needed to beat the Young Mambas to finish top of their pool, but wasted numerous opportunities and struck the crossbar in a 0-0 draw.

That took Mozambique to seven points and the number one position, with South Africa in second on five points and Zimbabwe, who defeated Lesotho 4-1, on four.

South Africa and Zimbabwe’s hopes of a best runner-up place are also dashed as the calculation for that place means results against the bottom teams in Groups A and B are discarded.

That means the wins for the pair against Lesotho are stripped away and they finish on two and one point respectively, which is already shy of the three points confirmed for second-placed Eswatini in Group C.

Zimbabwe will rue their loss to Mozambique last time out as they eased past Lesotho in their final game.

An own goal from Lesotho’s Siyabonga Monyaka put them in front, before further strikes from Tapiwa Mandinyenya, Kelvin Mangiza and Bill Antonio sealed the win.

Hlomelang Lebina grabbed a consolation for Lesotho, which was also their only goal of the competition.
Angola sealed top spot in Group C without kicking a ball on Tuesday having already completed their pool play.

But a 1-0 victory for Botswana over Eswatini left all three sides in the group on three points, which took head-to-head out of the equation.

Instead it was goal-difference that was the deciding factor and Angola’s +3 was better off than Eswatini (even) and Botswana (-3).

Group B will be decided on Wednesday with three sides still in the running for top sport.

Defending champions Zambia will take on Malawi (15h30) where a point would be enough to see them finish top.

However, a win for Malawi would take them ahead of Zambia on the head-to-head calculation and potentially top.

But if Namibia defeat Comoros (15h30) as well, that would leave all three sides on six points and goal-difference would be the deciding factor.

Eswatini will be keeping a close eye on the matches as well in the hope of still being the best runner-up.