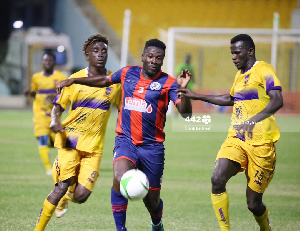 Head Coach of Legon Cities Football Club Bashir Hayford has confirmed that Asamoah Gyan has picked up an injury, which was the reason why he missed their Week 6 game against Ebusua Dwarfs in the GPL.

Coach Bashir Hayford says @ASAMOAH_GYAN3 is injured and that is why he is out tonight. He added, he can’t give the time frame for his return. #TheRoyals #WeDeliver #GPLwk6 #LegonCitiesDwarfs.

Asamoah Gyan has been struggling for fitness, which has led to limited playing time since joining Legon Cities Football Club.

After appearing in a few games as a substitute, he has picked up an injury, which his head coach Bashir Hayford disclosed makes his return date unknown.
Gyan joins Cephas Doku and other strikers to nurse injuries, leaving the Royals to rely on midfielders for goals this season.

Bashir Hayford says he is short in terms of strikers at the moment because Cephas Doku is also out too injured. He added, he may have to convert some midfielders to strikers to save the situation. #TheRoyals #WeDeliver #GPLwk6 #LegonCitiesDwarfs.

This will come as a major worry for head coach Bashir Hayford as side has struggled to score goals throughout this season – they have scored two goals in 6 games, all coming from the spot.

Legon Cities are yet to record a win after 6 games into the season.