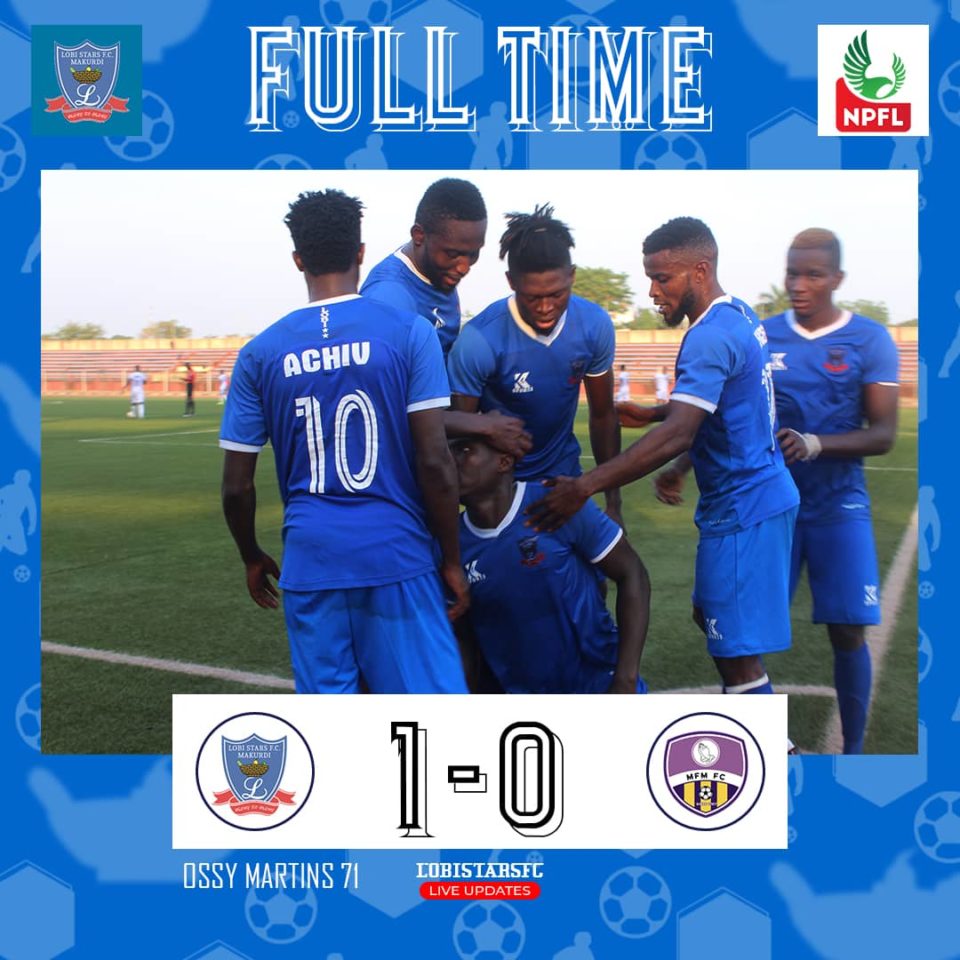 Lobi Stars Austin Ogunye who was the highest goal scorer during the preseason clashed with Clement Obasi in 19th minute looking helpless as the centre referee stopped to administer fair play and call for medical attention. Both players were stretchered out but return in to play.

The second goal possibility for Lobi Stars came when defending midfield player Osimaga Duke came from the defence to take advantage of a defensive kick to thunder home a shot that was saved by the brilliant goalkeeping of the Osayi Kingdom in the 21st minute.

A 38-minute quick reversal from defence to attack by MFM almost paid off but the cross was headed into corner kick by Ebube Duru. Aniyikaye Adeleye who stood in the Lobi Stars defence as a colossus blocked out across from MFM in the 41st minute. 45+1 Lobi Stars frantically made efforts to end the first half with at least a goal up, but anxiety and the resistant defensive work of MFM kept the scoreline barren as the centre referee sounded his whistle to end the first half at 45+3 minutes.

Upon resumption, Lobi Stars increased the search for goal as MFM started application of frustrating tactics. Love seemed unperturbed as they kept the pressure. The pressure almost paid when a clinical build-up from the middle between Onuwa Chukwuka, Douglas Archiv found Ebube Duru on the left his pass located Ossy Martins who screen through MFM’s defence effortlessly but his final shot at goal was saved by Goalkeeper the Osayi Kingdom.

In 64th minute, Coach Kabiru Dogo in a bid to add bite, introduced Chinonso Okonkwo and Mathias Samuel to take over from Onuwa Chukwuka and Tiza Samuel. The substitution proved effective as the only goal of the match came 7 minutes later when Ebube Duru’s customary left side power cross flew across the goalmouth and was returned by brilliant right full-back rookie Buruku John to Mathias Samuel, his extended header located Ossy Martins who headed to the far left as Goalkeeper the Osayi Kingdom watched in awe as the ball hit the back of the net for Lobi Stars first and the only goal of the game.

MFM quickly dropped the earlier tactics and started pushing for an equalizer but the defence of Lobi Stars manned by Adeleye Aniyikaye and Yisa Anifowoshe proved too tough for MFM.

The pressure from MFM was short-lived as Lobi Stars took over the search to increase the goal margin but missing haul continued. The nearest opportunity came when Ossy Martins would have made a brace as his 90th-minute bicycle flip kick missed the goal narrowly. The Centre Referee signalled for end of the game at 90+3 minutes.