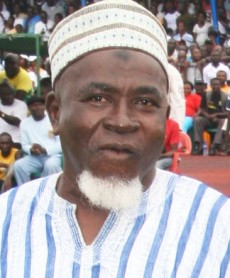 Bank Roller of Ghana Premier League side Alhaji Karim Grusah believes his outfit are not under performing in the ongoing league season.

The Insha Allah Boys have shown a level of good form than last season having won a game before match week 10.

Several Sports Pundits before the commencement of the 2020/21 League Season, marked the Kumasi based Premiership club for danger. They opined that, the Green and White lads will suffer relegation.

Statistics have shown that, King Faisal concedes in each match played in the Ghana Premier League. Revealing that, the team is not performing good to avoid relegation.

Speaking in an interview with Ghana- Kumasi based Radio Station Ashh FM, the outspoken Veteran football Administrator Alhaji Karim Grusah said, his players are doing massively well and all not under performing at all as believed by many.

“My players are not disappointing, they are doing their best”

“We are hoping for the best and praying luck turns to our side”But the boys are doing very well”, he added.

King Faisal have conceded more than 15goals this season after losing 4-3 to WAFA in their Premier League opener.

Currently, the Insha Allah Boys sit bottom of the league table with 6 points.