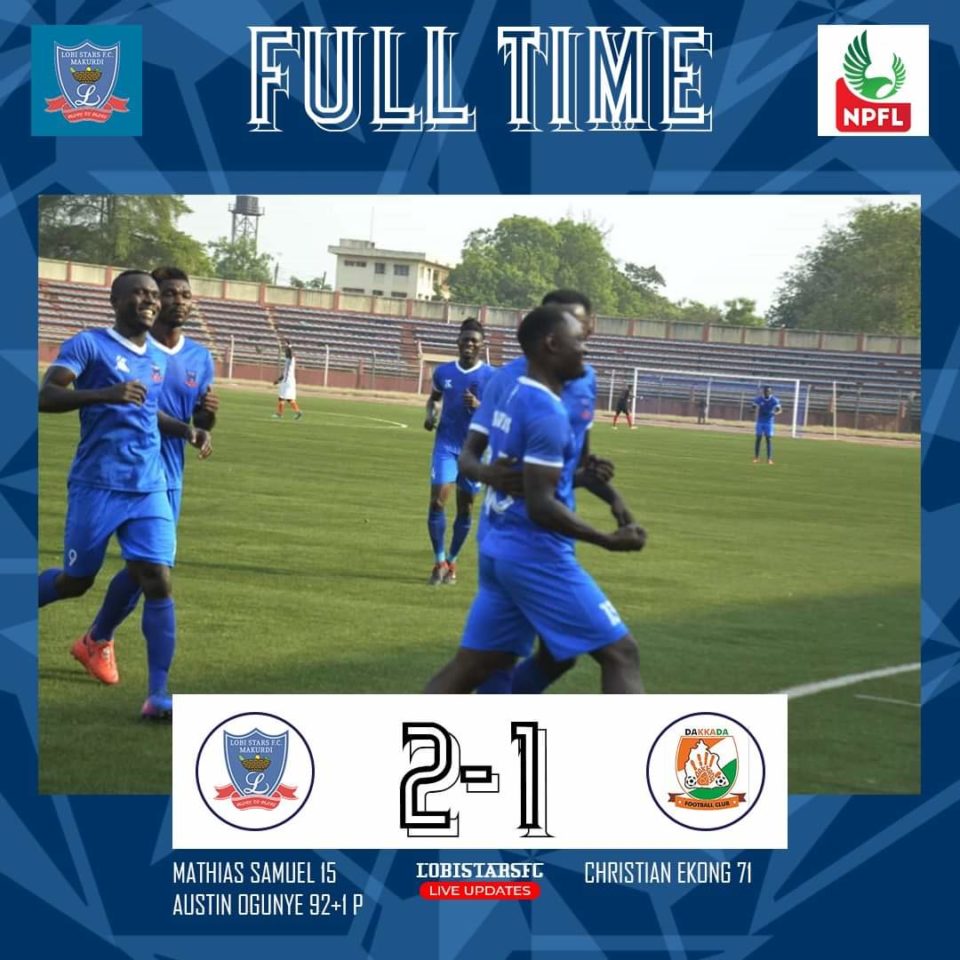 Dakkada’s Nnamdi Mejuobi took the kick-off at exactly 4 PM with early flashes of an ambitious team. Though unarguably the most difficult opponents of Lobi Stars in the 5 weeks old League, the story would have been different if the array of chances created by Lobi Stars were converted into goals. The goal machine Ossy Martins was the biggest culprit of the goal of missing galore.

The 15th minute free-kick, masterfully converted by Mathias Samuel for the second time, in the same manner, this season when Dakkada’s 15 shirted defence ace Olawale Odeyeni brought down Chinonso Okonkwo didn’t break down Dakkada as they continue to grow from strength to strength with a never say die spirit and resilience as their hunt for a leveller Kindles.

The reverse fireworks of Lobi Stars forward trio of Ossy Martins, Chinonso Okonkwo and Zenke Thomas tormented Dakkada’s back 4 all through the first half. All the goal possible chances created by Lobi Stars could not alter the result of the game till the Referee calls for half time. The scoreline at half time stood as Lobi Stars 1-0 Dakkada.

Proceedings resumed this time with Lobi Stars Chinonso Okonkwo taking the kick-off of the second stanza, Chinonso took advantage of a 50th-minute defensive error from Dakkada but found himself without support to aid a goal-scoring possibility, he was compelled to tactfully delay for Zenke Thomas to join him as he released a forward pass down the right for a shot at goal which lacks the power to beat Thomas Emekhudu.

Ossy Martins was badly brought down by Ubong Idio in the 54th minute but the resultant free kick taken by Ebube Duru failed to get converted by the final recipient Douglas Achiv as goalkeeper Emekhudu effortlessly picked up his shot at goal.

A yellow card was issued to Dakkada’s Ubong Williams for bringing down Douglas Archiv. The next minute saw Ebube Duru as he masterfully screened two opponents to find goal tasty Ossy Martins but his powerful strike at goal slightly missed his target.

Lobi Stars continued the strings of misses. Dakkada who despite their hard-faced fight couldn’t get a successful shot at goal. Dakkada in a bid to spice up their attacking strength pulled out Emmanuel Charles for Kokoeje Udoh in 66th minute of the game.

A 71st-minute controversial corner kick which put the centre referee and his second assistant at variance incidentally resulted in an equalizer as Christian Ekong headed home the corner kick taken by Ubong Williams for the much-sought equalizer.

Lobi Stars intensified the pressure for a second goal as they introduced Austin Ogunye in place of Douglas Archiv, but the goal missing galore wanned down hopes for a winner until the 90th-minute penalty to Kabiru Dogo tutored lads as Chinonso Okonkwo was brought down by Arinze Obuka in the penalty area. Austin Ogunye made no mistake as he sold a dummy to Goalkeeper Thomas Emekhudu in the 90+2 for the winner as there were 2 minutes lost of time in course of Dakkada protesting the obvious penalty.

The game at that point was considered won and lost until the referee sounded his whistle for the end of the game at 90+5 minutes.

with this win, Lobi Stars have further climbed from 6th to 3rd on the log and will be guests to Rangers International in Enugu in matchday 6 on the 24th January 2021.

How the two clubs lined up;