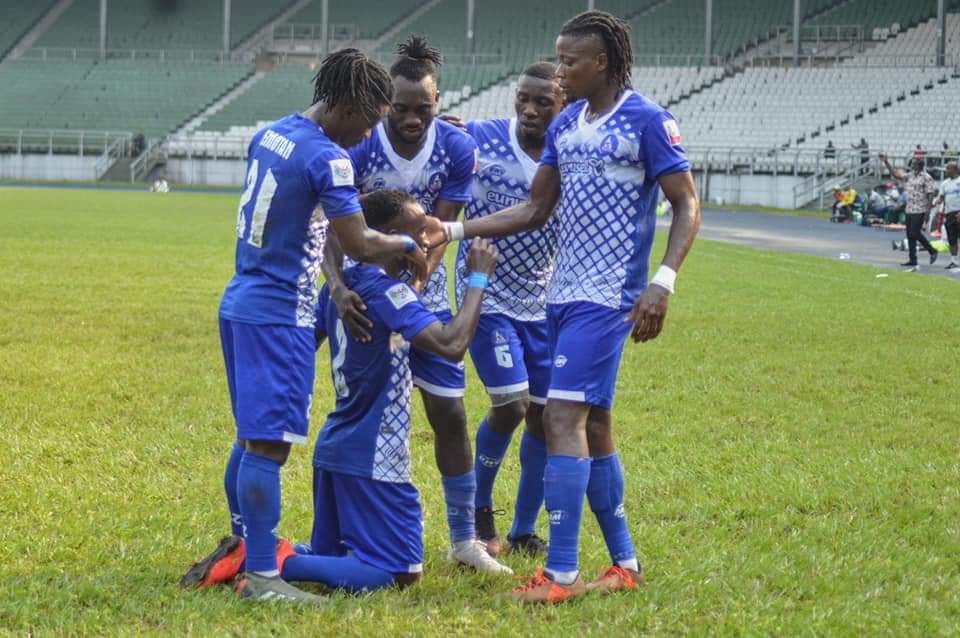 Coming into this game off the back of a narrow 1-0 defeat to Wikki Tourist FC, Stanley Eguma shuffled his back four in an effort to change the fortunes of his side.

Kazie Enyinnaya, Konan Ruffin and Ifeanyi Anaemena were recalled to the back four while Lookman Binuyo reclaimed his defensive midfield position

Cletus Emotan was in for another NPFL start of the season and instantly caught the eye with the way he took up space between the lines, while Stephen Gopey was his usual ball of industry and energy.

Rivers United made a strong start and, with six minutes on the clock, Bamba Bakari surged forward and pinged a cross into Heartland’s box which fell for Cletus Emotan whose effort was deflected for a corner.

Fortune Omoniwari scuffed a volley just wide on eight minutes as the “Pride of Rivers” went in search of an early goal.

Rivers United kept coming forward, and was soon awarded a penalty when Pascal Eze handled the ball in the area – and Godwin Aguda made no mistake from the spot.

Heartland soon grew into the game and came close themselves when Shedrack Oghali capitalized on a loose ball but saw his right-footed effort saved by Abiodun Akande in goal for Rivers United.

The Stanley Eguma team showed real heart and no little attacking spark and could have extended their lead when Godwin Aguda was left in a world of his own but his strike was saved by Ikechukwu Ezenwa to end the half with United in the lead.

As expected, Heartland came flying out of the blocks at the start of the second half but, after soaking up some early pressure, Rivers United extended their lead as Kazie Enyinnaya nicely controlled and finished in style a stunning lofty pass from Konan Ruffin. It was no more than Rivers United deserved

Heartland FC reduced the deficit in the 77th minutes when Shedrack Oghali low driven shot off a quickly taken free-kick by Samuel Nnoshiri beat Akande in goal for United.

In an almost similar fashion, Malachi Ohawume struck the match-winner from a quickly taken free-kick by Bobby Clement late on to secure all three points in the bag and the fourth win out of five matches in the league this season.

WHAT THE COACHES HAD TO SAY

Stanley Eguma (Rivers United T.A)
“I thank my players, the put up a good effort, I thank God almighty the most important thing and I thank the management too. We were able to win today. We prepared for this match very well knowing fully well that Heartland is a strong team especially their most recent game when the played Enyimba. We knew we were going to have a very big fight because it’s a local derby. We expected a very tough game like this and by the grace of God we were able to win.”

“We had to work extra hard to get these three points today. It was a hard-earned one. The way Heartland came fighting from all corners and at the end of the day, we rose to the occasion and pick the three points.”

“It’s a good one for us at least it will also bring back confidence into the team. And especially now that we are going back to the continent to play a continental game, this match is going to raise the morale of the players for us to continue to be in a winning streak, that winning mentality that we return to play the South African team.”

Christian Obi (Head Coach Heartland FC)
“Every coach will always be optimistic of victory, so we didn’t bargain it but it came. Well, I will attribute it to lack of concentration towards the dying minutes of the game.”